The grain markets continued to push lower this week as favourable weather and temperatures and a strong U.S. dollar did not help any bullish players. Wheat has had nine straight sessions of going lower, dropping over 7.5 per cent in last week, while corn had its worst week in the past year, down almost seven per cent for the September contract.

The rest of the complex didn’t fare much better with oats the biggest loser, down 8.6 per cent while soybeans dropped 3.5 per cent and canola was able to stand against the grains (pun intended) with only 2.5 per cent in weekly losses.

Rabobank upped their forecasts for corn and soybean prices, but at $4 and $9.60 by the end of 2015, these prices are still below the current prices on the futures board for the end of the year (harvest sales pressure anyone?). What’s certain is that the U.S. will likely see some average yield declines (and lost acres) because of the wet weather in May and June. 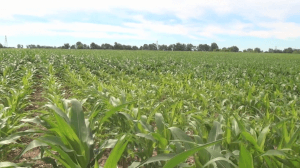 Currency trade is stealing some of the limelight this week as new economic indicators around the world show the U.S. is the only economy that’s actually able to stand up on its own. That being said, the strength of the U.S. Greenback will pressure on U.S. prices (as you saw this week) while most Canadian prices will likely see that exchange rate differential get priced into basis levels. I’m not expecting a Loonie-Dollar trade below $0.75, meaning that while some will hope the Canadian dollar losses will boost your grain sale price, the reality is that it will likely be muted, for the most part, by basis.

Speaking of forecasts, CWB wrapped up their annual Western Canada crop tour and it spoke a little bit to what things are actually looking like across the Prairies. It was no surprise that better numbers were found out east in Manitoba, while the worst stuff was in drought-riddled Alberta counties where some wheat yields are forecast to be about 25 bu/ac — that’s half of last year’s estimate. Total wheat production was pegged by CWB at 23.1 million tonnes (down 21 per cent from 2014), including 4.2M tonnes of durum, whereas canola production was pegged at 12.5 million tonnes, down 19 per cent year-over-year.

From a comparative standpoint, CWB’s forecasts are on the low-end from most analysts, but keep in mind that most other analysts didn’t cover 3,100 miles to do their analysis. From my perspective (and, no, I definitely haven’t driven that many miles), FarmLead’s numbers sit at 25.5 million total wheat, 4.6 million tonnes of durum, and 12.8 million tonnes of canola production.

However, the ministry did drop its forecast for canola exports to 7.6 million tonnes, a drop of more than 17 per cent from last year and the smallest export demand number in three years. Readily available export supplies on the west coast will likely be challenged this year because of Alberta producing a smaller crop and they’re the lowest hanging fruit for west coast exporters. Conversely, canola crushers should have plenty of supply to work through, but all this equals AAFC’s forecast for 2015/16 canola ending stocks to fall to a “very tight” 500,000 tonnes. In all likelihood, that number could drop to below 400,000 tonnes when AAFC eventually realizes they’ll have to downgrade things. 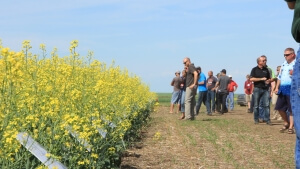 Ultimately, no one should be denying that there will be a smaller crop this year in Western Canada, one of the world’s largest-producing regions. We’re still a ways from the finish line for most of the North American crop so much like the acreage reports from a few weeks ago, I’ll take these numbers with a grain of salt (especially Agriculture Canada’s canola forecast – if you haven’t picked that up yet).

The market has ticked up to where it thinks the equilibrium is between supply and demand, and while we can’t discount lower Canadian production, supply elsewhere remains pretty good which will cap price increases and/or lead to more substitution effects. For example, should we expect higher canola prices? In the short-term no, but moving into winter months, it wouldn’t be surprising to see a high $12/bu number on the futures board, but without a big rally in the rest of the oilseed market (namely soybeans), anything above $13.25-$13.50 is likely not in our price 9-month forecast with substitution effects starting to take place.

When it comes to cashflow though, looking into 2016 there will be some more sales opportunities but what’s your cash balance look like through the end of the year? It’s worth the time to spend a few hours going over your expected expenses over the next six months (including that trip back to Phoenix or Mexico or Hawaii with a much more expensive U.S. dollar!) Who knows though – a winter-time rally that most are expecting might just give you the opportunity to pay for that trip.

One thought on “This Week in the Grain Markets — Whose Numbers Need a Reality Check?”