Can you hear that? That’s the sound of corn growing fast. In fact, parts of Ontario are on track to break heat records this week. What does this mean for the corn and soybean crop yields? That depends.

Peter Johnson kicks off this week’s Word with a full report on corn pollination pitfalls — could it be that it really is too dry?! After the year we’ve had that hardly seems possible, but many locations have had less than an inch of water in July (sorry, Essex county, you’re in the minority here). A dry May and cool, wet June has led to shallow roots, and without ample moisture we could see delayed silking. In short, the crop’s reproduction may be out of sync, leading to poor pollination, even though growing conditions are good. 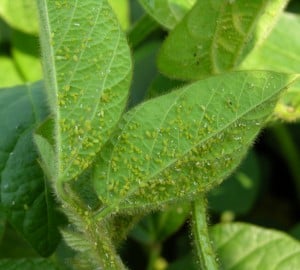 Also in this week’s Word, Johnson tackles more than a few insect problems — from soybean aphid populations building quickly, to questions about Japanese beetles feeding on corn silks and more, there are many critters out there causing some consternation for growers.

Staying with soybeans, some farmers are wondering if a second fungicide to suppress white mould is truly worth it, seeing as the tap has turned off, but Johnson reminds growers it’s humidity in the canopy, not just rain that the disease thrives on. Get scouting in the morning!

While you’d think we should be done wheat harvest the weather just hasn’t cooperated, and while you may be itching to get the crop in the bin, this extended grain fill period has added to yield, says Johnson. By how much? Listen below for that number.

From there we move on to lingering questions about glyphosate application as a pre-harvest tool. Why can’t you use that grian for seed, if it’s fit for human consumption? That all comes down to the how a seed grows, and the impact of the herbicide molecules in flour vs. a germinating seed.

Before Wheat Pete signs off, there’s one last thing that farmers must remember — post wheat harvest is a key time for weed control, especially when thinking about herbicide resistant weed populations. Post-harvest is an absolutely critical time for weed control — some wild buckwheat has already set seed! Get out there, scout, tank-mix and make sure this is one pass you don’t skip.

Until next week, farm safe!

Syngenta Seeds' NK conventional soybeans will be sold under a new brand for the 2024 growing season and distributed by two licensees – Hensall Co-op and Jackson Seed Service. The company says the move to a licensing model for its conventional, high-protein soybeans will help meet customer and end-use market demand more effectively. Syngenta will…