Grains this week were a bit boring as rain landing in most growing areas across North America and even Australia prompted a few estimate increases despite the lingering threat of an El Niño. Friday did bring some action as a lower U.S. dollar and some strong U.S. export sales helped pull the complex higher for most sectors to close in the green.

All week, the market had been relatively quiet as the complex tossed and turned over direction of technicals and sizes of crops. More than a few new estimates were released for production in many areas and given the way the U.S. dollar has been trading against other currencies, things have been kept relatively in line. On that note, the Canadian dollar is sitting near an 11-year low as oil continues its sell-off, something consumers may appreciate (albeit that depends on whether or not it actually translates to lower prices at the pump!).

Both Informa and FC Stone came out with their U.S. production estimate this week, of ahead of next Wednesday’s August WASDE report from the USDA. The former upped their soybean estimate by just 12 million bushels to 3.79 billion. Conversely, Informa left their U.S. corn output estimate unchanged at 13.4 Billion bushels, contrasting FC Stone’s estimate of 13.38 billion bushel and an average yield of 165 bu/ac. Compare this to the U.S.D.A.’s July estimate of 13.53 billion bushels, the questions I’m asking are will the USDA downgrade the crop next week in their report with the rest of the private market and which way will corn prices go? 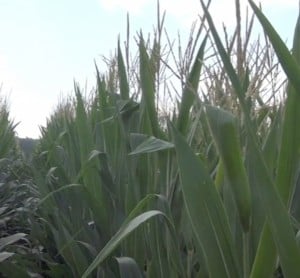 With the corn yield debate raging, analysts on the technical side of things continue to figure out secrets but here’s a free pro-tip: if something hits a one-year high, that’s a signal to sell at least something! While it’s good to look at the past, Darin Newsom from DTN goes on the offensive, saying that we will not see $5/bu corn this marketing year, but does believe that “renewed buying interest will come back to corn soon” and that targets between $4.60 and $4.90 on the futures board aren’t unrealistic, with cash prices averaging around $4.25/bu.

One catalyst for higher corn prices could be Argentina, the world’s fourth largest exporter. The USDA’s attaché in Argentina has recently suggested that because of ridiculous inflation and currency woes, even more acres in the South American country could push away from wheat and corn and into soybeans when planting starts in October. That is exactly when a new government is expected to take power in Argentina though and any new policies that are campaigned on likely won’t be implemented until after the growing season.

Another corn price catalyst could be Europe as Bloomberg’s latest survey pegs E.U. corn production closer to 62.8 million tonnes, or a 19 per cent drop from last year’s record 77.75 million tonne crop, as the heatwave in July took a toll on the coarse grain. The E.U. Commission also cut their rapeseed production forecast for this year by one million tonnes to 20.7 million tonnes (if you recall, we forecasted for a sub-21 million-tonne number in this column all the way back in March!). Conversely, private firms are forecasting a record wheat crop in France as estimates for soft wheat production range from 37.9 million to 39.4 million tonnes, with yields averaging above 110 bu/ac! Add in drier conditions during harvest, and what you get is a complete opposite from last year’s French wheat harvest when rain significantly affected progress and the crop’s quality.

Staying in the Black Sea, the Russian government remains optimistic that their comrades will harvest 58 million tonnes of wheat this year, solidified by SovEcon actually raising their estimate this week by 1.5 million tonnes to 57.5 million. While the crop may be decent, Russia had its worst start to the marketing season since 2009 by only exporting 1.3 million tonnes of wheat in July. The blame was put on a slow start to Harvest 2015 because of rains, but the reality is the export duty on exporters is likely limiting trading activity. Add in that the rouble is sitting near a seven-month low against the U.S. dollar and you get the Kremlin asking for new proposals on how to tax wheat exports. Nonetheless, Russia did sell another 120,000 MT to Egypt this week at a multi-year low price of below $200 USD/MT

On that note, apart from this week’s sales, U.S. corn sales are down 38 per cent from a year ago to just 4.3 million tonnes, but it’s worse for soybeans, where sales are down 50 per cent year-over-year at just eight million tonnes pre-sold. Wheat is faring a bit better with 7.7 million tonnes contracted, down just over nine per cent from levels a year ago. The real challenge will be the globalized state of the trade we’re in today – Brazil, Argentina, & Ukraine all have plenty of corn to ship to Asia right now, and given the aforementioned sustained strength of the U.S. dollar, buyers have greater purchasing power going somewhere other than the U.S. these days. While Russia is having its troubles because the government has intervened (as mentioned) the best example is Ukraine shipping out over 2.6 million tonnes of grain (and with no signs of slowing down).

Finally, I’m getting a fair amount of phone calls lately about making sales off the combine. Generally, I think it’s good to have about 20% to 40% of the crop contracted by the time it comes off the field (dependent on storage space and market fundamentals of course) – whether that’s through forward contracts or making sales literally as you’re out harvesting (shameless plug: made possible through the FarmLead app).

One thing I definitely preach is relativity – where are prices today compared to their historical averages? You can compare it to the last six months, last year, last five years, or maybe 10. For example, our friend Chuck Penner from LeftField Commodity Research makes the great point in only four per cent of the last 15 years could you price yellow peas above $9/bu and if you were selling small red lentils at or above 35 cents/lbs, you’d be in the top 10% of prices over the same time frame.

It would be great to see some higher prices in the near term but it will totally depend on how much sun shines down over the next two to four weeks. I think most producers across the major agricultural production regions of North American can agree that we could take a break from the rain. Of course, some fundamentals suggest we could go a bit higher, but I will never challenge anyone looking to lock in a profit for 10% or 20% of production and managing price risk versus speculating and hoping for another 20% move to the upside. Translation: making smaller sales when you can, equals not having to sell a bigger quantity when you have to.

Corn School: 3 Planter Flubbs to Avoid & The One Thing you MUST do this Year