Grain markets this week took a hard tumble as, on Wednesday, the USDA performed a dramatic leg sweep of the market with their August WASDE report. It completely blew most expectations out of the water as to where supply for the 2015/16 year sat. Instead of U.S. corn and soybean yields dropping to 164.5 and 44.7 bu/ac, respectively (like the market estimated), the USDA actually raised them to 168.8 bu/ac and 46.9 bu/ac.

The last time there was a wet summer like this in America (2010), the USDA raised their corn yield by 1.5 bu/ac from July to August, then dropped the August number by 9.2 bu/ac in October, and then that October number was felled by another 3 bu/ac in January.

There’s a lot of questions about methodologies, since the numbers are hard to add up. For example, the portion of U.S. soybeans rated good-to-excellent the week of the report were 7% lower than a year ago. Yet, the yield predicted a year ago was 45.4 bu/ac. In this report, it’s 1.5 bu/ac higher.

In addition, corn production was raised to 13.7 billion bushels and 2015/16 ending stocks to 1.7 billion bushels, partially thanks to possible record yields in six of the top 12 corn-producing states in America.

The USDA dropped Argentinian production by 400,000 tonnes as a recent slew of wet weather is slowing harvest activities and seriously affecting qualities.

North African wheat demand has increased slightly. A poor harvest in Algeria has led to imports growing 18% year-over-year so far (though durum imports for the country are down 7% year-over-year to 1.04 million tonnes).

Compounding things this week was the Chinese government devaluing their currency by almost 2% (the yuan is fixed, meaning that it doesn’t fluctuate like the Canadian or U.S. Dollar when things happen in the markets). The devaluation cheapens the costs of Chinese goods as it now takes less money to buy the same amount of product than yesterday.

Simply put, between the quantitative easing programs, lowering of interest rates, and now this currency drop by the government, many analysts are saying the move was one of desperation to get the economy back on track towards their targeted 7% GDP growth.

Staying in the Orient, it appears that China is tired of stockpiling corn, as the government there is looking at moving towards “a more market-orientated pricing mechanism” for domestic corn purchasing. Currently, domestic prices are about 30% higher than that of import prices, which is why the People’s Republic is rumoured to be sitting on anywhere from 60 million – 90 million tonnes of the coarse grain.

There have been hints from Beijing that corn areas in the key northeast growing regions could be replaced with crops that are less fertilizer- and water-intensive, such as pulses (anyone notice the massive Chinese demand in yellow peas lately? Just saying…). Some analysts have suggested that some of these acres could move to an oilseed like soybeans but given the consistent growth of the Chinese meat industry (which they want to keep as local as possible), it’s likely that soybeans will continue to be the leader when it comes to ag imports.

Overall, the Wednesday report came crashing through the front very loudly, broke a few plates, and the market will keep the back door open for it to leave through because U.S. yields and production can only drop from here. 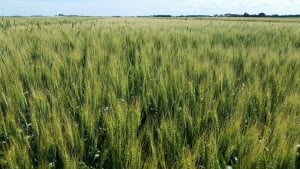 The rest of the report was mostly accepted as accurate but the U.S. numbers tend to lead the charge as to where global prices head. That in mind, the market is pricing in expectations for future supply and demand, which is why prices have dropped and suggesting upside potential is now more prominent for the major row crops (corn, soybeans, wheat, and even canola). More than anything, it’s not so much about supply right now as it is demand.

You could technically say the opposite about the pulse market as current prices are accounting for below-average yields in Western Canada for lentils and peas, and should better numbers start to be heard and seen, markets will fall back.

The big question I’m asking you this week is whether or not you think those crops that got planted later will see some better yields than their brethren planted the week or two before.

If better numbers are going through the combine, then we’ll see an accelerated decline in prices in the short-term.