Corn and soybean futures have trended lower since mid-summer, but with harvest in the early stages, at least one analyst thinks the lows might be in for corn while soybean values have further to fall. 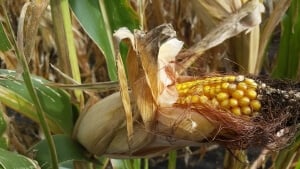 In the video below, he says yields in northern and western regions of the Corn Belt will have to make up for inconsistent-looking corn in southern and central areas.

“It’s up to the west and the north to make up the difference. They have some great crops, but it’s probably not enough to suggest the 167 or 168 bushels that the USDA is indicating. It’s probably closer to 160,” says Doherty. “If we take that number off the carry-out, it starts to make a bigger difference and suggests we have a pretty solid floor at around $3.60, $3.65 on the futures.”

Conversely, he says the soybean market likely has some more downside potential as a large part of the Midwest soybean growing region received timely rain in August.

If a grower has to choose between storing corn or beans, Doherty says he’d lean toward keeping corn.

“Corn is probably closer to a bottom or its bottom is in already. I’m not convinced the bottom is in for beans yet.”

June WASDE and weather boosts — this week in the grain markets

Pricing in the Risk — This Week in the Grain Markets