The developing El Nino weather system that’s been nicknamed “Bruce Lee” for its strength and “Godzilla” for the destruction it could cause has become the biggest weather story in North America.

The U.S. National Oceanic Atmospheric Administration has said it could be the strongest El Nino since NOAA started tracking the Pacific weather phenomenon in the 1950s (you can read NOAA’s latest update here). And there’s hope the weather system could bring moisture relief to areas suffering from the historic drought along the West Coast. 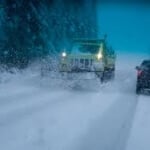 For Western Canada and the Upper Midwest, El Nino is usually associated with warmer temperatures, but Leon Osborne, a meteorologist at the University of North Dakota, says the effect could be trumped by another weather phenomenon that we’ve heard plenty about in recent years — arctic oscillation (sometimes referred to as the “polar vortex.)

“In our part of the country, (El Nino) is only one of several factors. Most important would be arctic oscillation,” he says in this video filmed after his weather talk at Big Iron in Fargo, North Dakota last week.

Get the latest Canadian ag news delivered to your inbox — sign up for our free newsletters here!

Osborne says the arctic oscillation pattern is trending toward a negative phase, which indicates a stronger airflow away from the arctic, contrasting the warming effect El Nino is expected to have over the next five to six months.

“That does set up the situation where we may see those contrasting air masses come into play with one another and we could see a higher frequency of clipper storms, fast-moving storms from the northwest,” says Osborne, explaining that could result in higher snowfall totals this winter.

For researchers at the University of Guelph, addressing fusarium head blight — one of wheat’s most nagging diseases — is an agronomic time trip through the geography and history of Canada. The researchers, led by Ali Navabi, have gone back to the 1880s through to the present to look at the genetic diversity of 450…