The wait is over. Following years of anticipation, John Deere has joined its competitors in building a four-track high horsepower tractor.

The 9RX series made its farm show debut at the Farm Progress Show in Decatur, Illinois earlier this month.

As Deere’s Colin MacDonald explains in the video above, the four-track machines share plenty of similarities with the wheeled and two-tracked models in the 9R series when it comes to transmission design, control features, telematics, hydraulics and PTO.

“What’s unique to the 9RX is the cab suspension. Customers have told us it offers one of the best rides of a four-track tractor in the industry,” he says.

The undercarriage for each track is about 20 percent larger than competitor designs, notes MacDonald, which he says helps with traction and extends the sprocket and roller life since undercarriage components are turning slower. 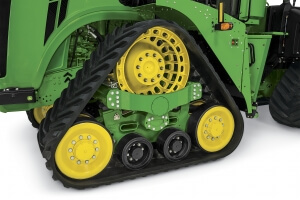 For tracks, the Deere machines feature Camso Duradrive 3500 and 6500 belts, available in 30-inch and 36-inch widths.