Physical challenges used to be the toughest obstacle facing farmers. But thanks mainly to automation and other forms of technology, that’s no longer the case.

Still, there’s a sense of stress and anxiety on many farms, even though food production should be getting easier. 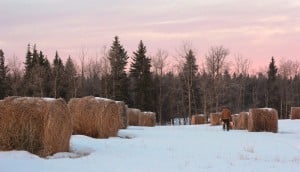 One of the very things that draws people to farming – that is, the tranquility of the countryside and the prospect of being their own boss – also keeps them apart from a lot of human contact, sometimes even with their own family.

Another theory is the image of the farmer as a stoic, unflappable individual. We’ve come to learn that challenges such as depression and anxiety can afflict anyone, including tough-guy and tough-girl farmers.

But it’s a hard image to shatter. On or off the farm, someone’s inability to get out of bed in the morning because of depression can easily be mislabeled as laziness and weakness. And when there are chores to be done, especially on a livestock farm, one worker’s absence leads to stress for those left to pick up the slack.

A more modern problem, again related to livestock producers, is the challenge of dealing with rapidly spreading animal disease. This is not wholly a problem for the 2000s; disease has always been a problem for livestock farmers. But with bigger herds and flocks, and more confined housing, the effect of disease can be more severe than in the past. And the prospect of losing all your animals almost overnight, or losing markets even for the healthy ones because of a disease outbreak from neighbouring herds or flocks, can keep a thinking person awake at night.

Finally, the idea of having life-and-death domain over livestock is tough on some farmers. Hard lessons about the beginning of life and the end of life never end for livestock producers. The relationships that develop with animals are enduring. Sure, livestock farmers raise food animals. And theoretically it’s easier to draw a line between ending a companion animal’s life, and a food animal’s life…isn’t it?

A lot of attention has been focused lately on farm animal welfare, on stress and anxiety facing livestock. Nationwide, major efforts are underway to adopt standardized codes of practices for livestock production. That will give farmers across the country research-based, agreed-upon approaches for looking after their animals.

That’s fine, and good. Welfare matters. It’s well known that livestock that live better (meaning those that enjoy high standards of animal welfare) are healthier, and more likely to be more productive members of herds or flocks. Plus, the public cares a lot about the way farm animals are treated. Keeping it happy is vital, too.

And the unfortunate reality is that within the sector, reasons do indeed exist to believe those struggles are present.

Many practicing large animal veterinarians know producers who are finding it hard to cope with the downside of livestock production. They also know other veterinarians who similarly find handling such matters a huge hurdle. And although there have been studies looking at suicide in rural Canada, there have not been any that have taken the pulse of overall mental fitness among the country’s farming population.

Fortunately, this is about to change, beginning with livestock farmers and veterinarians in Ontario.

Four simultaneous efforts are underway at the University of Guelph’s Ontario Veterinary College to help provide the sector with some solid research-based data about these important matters.

Recruitment for the first study, a survey about farmers’ stress and resiliency, began at the Outdoor Farm Show. There, helpful commodity groups and farm organizations offered the researchers a table in their booths, where the 80-question survey could be introduced to passers-by.

The survey, designed to measure burn -out, depression, anxiety and perceived stress, as well as resilience, will run through the fall. Researchers hope to attract up to 1,000 participants, and get some solid numbers about mental health problems they’re facing. They’re asking Ontario livestock farmers to take part now.

Yes, it’s a busy time on the farm. But the estimated 15 minutes it takes to complete the survey could hardly be more important.

Another study involves veterinarian wellness. Preliminary findings related to this research involving more than 500 practitioners are in, and can only be described as alarming. Researchers found roughly one-third of the participants have anxiety, with another third considered borderline. Almost one in 10 were classified as having depression; about three in 20 were in the borderline category.

No wonder some of the other parts of this initiative at the veterinary college are designed to promote wellness among veterinary students. Entering the profession, they can recognize danger signs and deal with them before they become problems.

For farmers, the researchers modified Mental Health First Aid Canada’s standard mental health first aid training program, and offered it to veterinarians and agricultural support staff in concert with the Canadian Mental Health Association. The program is designed to be a rural self-help initiative, a first line of action to help people on the farm recognize the likes of depression, excessive stress and anxiety.

Ultimately, this research effort overall will inform prevention and treatment programs for livestock producers and veterinarians.

But that hinges on getting a firm understanding of the problem. And researchers can only do that with farmers’ participation.

Be tough, and find out more about the producer stress and resilience study at www.producerwellness.ca.

Want the Public to Better Understand Farm Safety? Then Tell Them

Fad or Trend? A Closer Look at Integrating “Local” Into Your Farm

The Muzzle is Off: Federation Gives Boost to Press Freedom

Calling All Scientists! Agriculture Needs You to Speak Up, Too