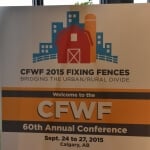 Fences — Bridging the Urban/Rural Divide.” Rob Saik, CEO of Agri-Trend, was one of the panelists in the “Found at the Farm Gate”  Friday afternoon session, and he suggested that one of the first steps to bridging the divide would be to stop using the “little red barn” to represent agriculture.

Saik specifically cited the conference’s logo as an example, which featured a red barn and yellow silo in font of a blue cityscape.

Proponents have since argued that the barn is a symbol of agriculture in a modern era, like the book is a symbol of education in a digital age — timeless. Saik doesn’t see it that way.

Subscribe to the FREE offering of RealAg Email Newsletters

RealAgriculture’s Shaun Haney asks Rob Saik, CEO of Agri-Trend, about his contribution to the Canadian Farm Writers Federation’s (CFWF) conference theme: “Bridging the Urban/Rural Divide.” Shaun asks why the “little red barn’” icon matters, why we’re hesitant to give it up, and what the icon should be instead.