The ceiling on what’s possible with wheat yield has been pushed higher once again.

A farmer in northeast England has just claimed a new world wheat yield record of 16.52 tonnes per hectare, or in North American terms, 246 bushels per acre.

As was pointed out in this Wheat School episode, yields surpassing 120 bushels per acre are not uncommon in the UK.

“We had an ideal growing season. We were lucky with the weather and the crop was never under stress,” Rod Smith of Northumberland told Farmers Weekly.

According to the British farm news outlet, Smith’s recipe for the record yield included 277 pounds per acre of nitrogen fertilizer, four fungicide applications and a seeding rate of approximately 165 pounds per acre.

Read more from Farmers Weekly on the record wheat yield

Smith’s yield surpasses the standing Guinness Book of Records standard for wheat of 233 bu/ac, set by a farmer in New Zealand in 2010.

For reference, according to Statistics Canada, the average Canadian wheat yield in 2014 was 46.1 bu/acre. 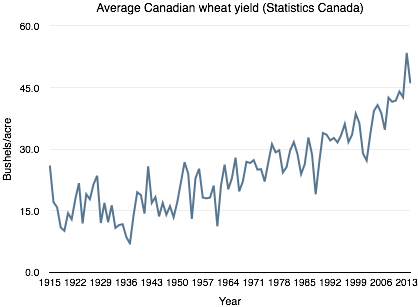