Harvest is in full swing in Ontario, high-moisture silage pits are seeping (you need to act on this!), winter wheat planting is underway, weakling cover crops may be stronger than you think, and big thanks for your valuable feedback! All that and more in this week‘s episode of Wheat Pete’s Word. 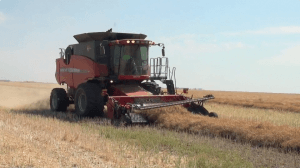 For the most part, harvest is looking better than anticipated, though edible beans are yielding as low as 500lb/ac in places, due to excessive rain after planting.

Some silage pits put up a little wet are starting to seep. Johnson explains why you must not let that liquid get into the tile. Contain it.

And, Essex County is seeing the start to corn harvest, with less than 25% moisture and good yields so far.


Where to begin on winter wheat planting.

On cover crops, Johnson talks single-cut versus double-cut red clover, strip tilling and what to consider as a cover crop this late in the season.

If your oats are coming into head, for goodness sakes, wipe them out, chop them up, do something with them.

Don’t miss out on everything else Peter Johnson has to say in this episode of Wheat Pete’s Word, as he covers the significance of the number 3431, rust in oats, and hey — a big shout-out to everyone who has been providing feedback! Thank you!

Solid average yield numbers coming in across the Prairies, with a couple of caveats