The federal government has promised $4.3 billion to compensate the supply-managed dairy and poultry sectors for concessions made in the Trans-Pacific Partnership deal announced this week, but for chicken farmers, a coinciding decision by Ottawa to close import loopholes for chicken is seen as more important than the compensation. 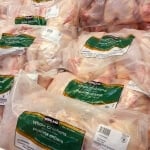 Mike Dungate, executive director of Chicken Farmers of Canada, says they were disappointed the government opened an additional 2.3 percent of the domestic chicken market — the equivalent of 23.5 million kilograms — to imports.

CFC estimates $225 million of the government’s $4.3 billion supply management compensation package rolled out on Monday will go to chicken farmers, but Dungate says the compensation wasn’t the most valuable news for chicken producers.

“The most important thing to us is that we’ve had these outstanding issues around import controls, around what we call specially-defined mixtures, spent fowl and a duties relief program. We’re pleased the government has announced their commitment to immediately address these issues. Those are the most important piece for us in terms of this negotiation,” he explains.

CFC has argued for years that fraudulent practices are being used to import chicken outside of the supply management system by adding sauce or other ingredients, mislabeling spent fowl and by importing high value meat, then substituting it with low value domestic meat for export.

“(The payments) are of a limited duration and money. What we’re really trying to do is ensure that we have integrity in our system, and that’s more important, by far,” says Dungate in the conversation above.

He also discusses why chicken access was granted even though CFC saw no major push from the U.S. chicken industry, how public opinion about supply management has been affected by the TPP and whether the end of TPP negotiations signals a period of stability for the supply management system.

Mary Robinson on collaboration and hope for the future