At Canada’s Outdoor Farm Show last month, Lynch helped co-ordinate the Corn Stalk Baling Demonstration. Afterwards he joined the Corn School to share his thoughts on whether Ontario farmers should be jumping on the stalk baling bandwagon.

Today’s corn hybrids are producing twice as much growth as 20 years ago, Lynch notes. This year he believes the Ontario provincial average could top 160 bushels per acre thanks to better hybrids, earlier planting, higher populations, and more fertilizer. Better disease packages, as well as insect resistance to pests such as European corn borer, also help the hybrids stand up with less fall breakdown.

All this progress poses both challenges and opportunities.

When it comes to removing crop residue, growers have to be mindful of soil conservation and returning organic matter to the soil, “but right now, I don’t think we can harvest enough” corn stalks, says Lynch.

Related: Baling Corn Stalks — How Does it Work?

Even with today’s harvesting equipment, there is considerable crop residue remaining on the field as evidenced at the baling demonstration. “It’s going to leave a lot of organic matter. We just can’t pick it up,” adds Lynch.

For farmers, baling corn stalks opens up bedding, feed and bio markets – everything from fuel to car parts. It can also help reduce tillage. “Some farmers have gone to extra tillage to manage corn stalks, but if we can bale the straw, we don’t have to do as much tillage,” argues Lynch.

That could open the door for more no-till acres. “Corn stalks keep soils cold and wet in the spring,” says Lynch. “If we can get rid of some of that residue, I think on some ground, we will be more successful no-tilling soybeans… I can even envision higher soybean yields on fields where we take these corn stalks off.” 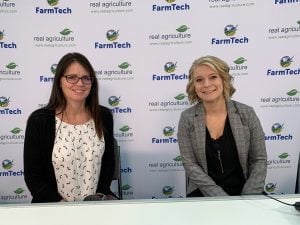 Growing pulses in 2019 was a challenge across the board. The growing conditions that were needed simply were not there, especially in the areas that saw a lot of rain. Robyne Bowness Davidson, pulse research scientist with Alberta Agriculture and Forestry, says that due to all of said moisture, a lot of the pulses such…Read more »