Words like “excellent” and “great” are being used to describe the 2015 corn crop in the grain corn-growing regions of Western Canada. 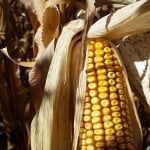 “I’m almost tempted to say phenomenal, but that sometimes sets high expectations,” says Dieter Schwarz of PRIDE Seeds in this Corn School episode. “We certainly have a great corn crop. Yields are average to in some cases, well-above average. We have great bushel weights and moisture levels coming in are quite acceptable.”

With no early frost, most corn plants matured and dried down naturally this fall.

While lower corn prices have tempered some of the excitement about growing corn on the prairies, he says there’s still interest in planting more acres in expansion areas of western Manitoba and eastern Saskatchewan.

“While prices certainly aren’t in the $8 range anymore, our lower dollar has helped a little bit and our grain quality this year is such that it helps us reach some of those markets like the distillery in Gimli,” he notes.

According to Statistics Canada, there were 230,000 acres of grain corn planted in Manitoba this year, down from 380,000 in 2013. An estimated 40,000 acres were planted in Alberta in 2015, tying last year’s record for most corn acres planted in the province.

Dieter Schwarz and RealAg’s Kelvin Heppner discuss the 2015 corn crop and what the future holds for corn on the prairies, including the development of shorter season varieties, in this Corn School instalment: