When asked whether failure or success makes a leader, Dianna Emperingham of Bayer CropScience says it’s best to experience a balance of both. Leaders, she says, learn from failures and move on.

It can be difficult to be a leader, but even harder, is to lead with courage, Emperingham says. Courageous leaders make difficult decisions.

“You need to evaluate what is best for your team,” she says in the above interview, filmed at the Advancing Women in Agriculture Conference in Ontario. “Sometimes it’s advancing people; helping people grow into new roles. Sometimes being a courageous leader means helping people move on to find other roles in other organizations where maybe they’re a better fit.”

The agriculture industry is probably lacking in courageous leaders, but it’s not an industry-specific issue, she says. Leadership is hard.

Emperingham encourages youth to get involved in leadership roles early, to prepare themselves for management when their knowledge and experiences support it.

Related: Defining Gender Equality, and the Importance of Mentorship in Agriculture 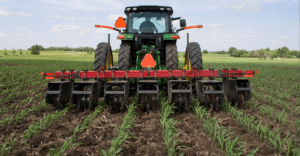 The Advancing Women in Ag Wrap Up: Work/Life Balance, Cucumber Water & Why Different is Good