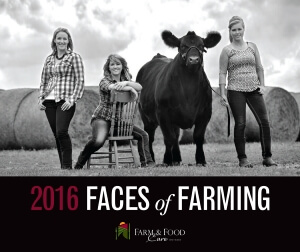 Farm & Food Care Ontario unveiled the 11th edition of its “Faces of Farming” calendar at the organization’s Harvest Gala in Kitchener on Thursday.

The 2016 calendar profiles farmers from across the spectrum of Ontario agriculture — from poultry and dairy to corn and greenhouse vegetables.

Each page in the 2016 calendar has a QR code that leads to video profiles with each of the farms (listed by month below).

Since starting in 2006, the calendar has showcased 150 farmers and farm families.

Almost 4,000 politicians, grocery stores, butcher shops and media sources will be mailed copies of the calendar. Copies can be ordered by filling out this online order form, or by calling 1 (519) 837-1326.

Loved working with amazing group of farmers on 2016 #facesoffarming calendar. See it at https://t.co/gbuKVHwFQ1 pic.twitter.com/mIFOYYCQF1