Manitoba’s newest slaughter plant is up and running, although the facility north of Carman is still waiting for the stamp that would make it the first federally-inspected plant in the province with significant beef capacity in three decades.

True North Foods is currently processing 80 to 100 head of cattle and bison per week, with plans to ramp up to 1,000 head per week when the Canadian Food Inspection Agency grants its “federally-inspected” status, opening up markets around the world.

Hosting a tour as part of the Manitoba Feedlot School this week, owner Calvin Vaags said the process of becoming a federal plant has been “considerably more difficult than I ever imagined.”

“I knew it would be hard, but it’s been more, and I didn’t think it would take this amount of time,” he says in the video below. 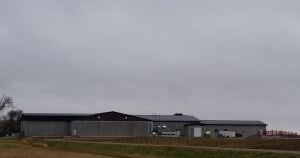 A cattle and grain farmer from the Dugald area, Vaags started a beef retail store called “The Carver’s Knife” in Winnipeg in 2004 after the U.S. border closed to Canadian cattle due to BSE. In 2008, he bought Plains Processors, the small slaughterhouse north of Carman that was processing most of the beef for his retail business. Construction of a new federally-inspected slaughter plant on the Plains Processors site started in late 2012 with an estimated price tag of $13 million.

“It’s been a long road to get here, but we’re almost there,” he says.

There have been several funding-related hiccups along the way, as a $2.8 million grant through the federal government’s Slaughter Improvement Program fell through due to construction delays and the defunct Manitoba Cattle Enhancement Council failed to live up to its funding commitments.

Questions have also been raised about the viability of the plant, with many existing beef slaughter facilities in other parts of North America struggling to find enough cattle to operate efficiently.

“It is true. In North America there is more packing facility than is really needed and some of it is not utilized, but if you look at it, the overcapacity is in areas where there traditionally has been a lot of slaughter capability,” Vaags explains, noting freight costs are part of what will make the plant competitive. “Here in Manitoba there is no federal packing plant for 750 miles in either direction, or longer if you go east. It’s the geographical area that makes it work.”

While it means True North won’t be competing on efficiency with larger beef plants to the west, east or south, the ability to trace each piece of boxed meat coming out of the plant back to an individual animal will open marketing opportunities, believes Vaags.

“That package of meat will have all the information back to the CCIA tag number of the animal that it came from and the farm that it came from,” he says. “Here in North America there’s some interest in that, but there isn’t nearly as much as overseas. China, for instance, is really interested in being able provide traceability right back to the country, farm and animal that the product came from.”

In addition to buying cattle from producers and feedlots, Vaags says there’s been more interest than he expected in fee-for-service processing for companies or individuals who already have animals and a market, such as organic, grass-fed, bison or ethnic niche markets.

The plant currently employs 26 people. Vaags expects it will require 80 to 85 people when running at full capacity.

(No cameras were allowed inside the plant.)

What’s Next for the Beef Code of Practice?