The majority of respondents to the Saskatchewan government’s farmland ownership review this summer said they oppose foreign ownership and investors such as Canadian pension funds purchasing farmland in the province.

More than 3,200 people submitted their views during the consultation process that ran from May 20 to August 10. The results were published on Wednesday.

“The purpose of the consultations was to inform government on how best to approach farmland ownership, and the results are clear,” Agriculture Minister Lyle Stewart said. “The vast majority of respondents do not support pension plans or foreign investors purchasing farmland in Saskatchewan. They do, however, support our government in taking a stronger role in enforcing farmland ownership rules.”

Some of the survey highlights (more detailed results can be found here):

62 percent of the respondents were farmers.

A summary of meetings held with stakeholder groups and all written submissions have also been posted online.

The province says next steps will be announced later this fall. 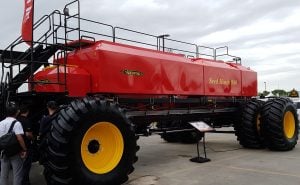 Why would China target Richardsons?