In this episode of the Beef Market Update, Gateway Livestock’s Anne Wasko joins Shaun Haney in-studio for an update on the extreme volatility in the beef market since September. The duo talk about the changing market, sluggish U.S. exports, diminishing Canadian feeder cattle exports (down 67% since July) and the aggressive inventory expansion efforts of our neighbours to the south.

And, we’d hate for you to forget about the ongoing Country of Origin Labeling dispute. The World Trade Organization (WTO) is expected to announce it’s decision on retaliatory efforts on December 7.

“And from that,” says Wasko, “we certainly hope the next step is that the Senate votes to repeal COOL.” 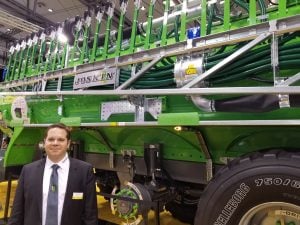 What do you get when you mix an enormous manure spreader with electric technology? Well, a medal for starts. The eAutoPower gearbox e8WD for 8R tractors, developed through a partnership between John Deere and Joskin, won Agritechnica's gold innovation award this year. The technology uses two electric motors as a continuously variable actuator, providing drive…Read more »