The conversation about labeling genetically engineered products is reaching a crossroads in the U.S.

I wonder how much longer this can last. 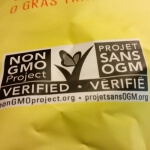 On one side, groups like Just Label It (funded by the Organic Voices Action Fund) are lining up their celebrity endorsements to try to sway unaware consumers. They are reaching into the legal system to try to push public scientists over the edge. And they are making an enormous campaign look very grassroots, despite the millions of dollars being funnelled in from large organic brands.

At the same time, the U.S. political system is trying to clamp down on a mishmash of rules across the country in which one county may ban growing genetically modified products while a state tries to enact GMO labeling. Some disapprove of federal action to stop labeling. I’m all for it.

Labeling is nothing but cheeky marketing masked as some kind of goodwill.

First off, let’s think about what a genetically modified organism (or GMO) is. According to the Canadian Food Inspection Agency, a GMO is any food product that has been modified by any means. That includes cross-breeding, a tool nearly every crop in the world has undergone over hundreds of year.

That’s very different than what most people claim to be against. They are really against genetically engineered (GE) products. Genetic engineering takes a seed, changes a gene pair or two and then studies that change in-field for about a decade before receiving commercial approval.

So what are people afraid of? Do they hate the idea of changing a crop’s genes? How can they when the goal of cross-breeding is to do just that —change the genes in a crop for something more favourable and conventional or organic crops will fall under that category.

Do they hate the idea of changing the genes of a crop using something other than nature’s breeding? How could they support mutagenesis then, when radiation is used to try to scramble genes to get a more favourable crop? Mutagenesis changes thousands, even tens of thousands of gene pairs and no safety testing is required before selling the seeds to be grown. In fact, some organic products (grapefruit, for example) have even undergone mutagenesis.

Organic Voices Action Fund speaks often of the support they have from consumers. But of course there’s support. They sell GE-free products and can be certain consumers will line up if they scare them enough to do so. They also like to point fingers at those they think are pushing against a GMO label. They really like to point fingers at Coca-Cola, while simultaneously claiming Honest Tea is one of the good guys. But Coca-Cola finished the take-over of Honest Tea in 2011, the year that Honest Tea sold 110 million dollars worth of product.

Stonyfield Organic is another brand sliding dollars to GMO labeling campaigns. The majority owner of that brand is Danone, a company with revenues of over 20 billion globally.

Organic Valley sells nearly a billion dollars worth of product, and Earthbound Farm, Silk Soy & Almond drinks and Horizon Organic are all owned by the Whitewave, a company with a market cap of almost 8 billion dollars.

The players in the fight to get GE’s labeled are not in it for the people they claim to be. They are companies with deep pockets that are trying to move the legislative needle in their favour, regardless of how much more groceries are going to cost a family.

Here in Canada, as the government changes hands, it is clear that this food fight is gaining momentum. Likely hopeful that money will sway the U.S. (and Canada will be forced to follow suit), campaigns like Kids Right to Know are gearing up.

The NDP has hinted that they might be in favour of GMO labeling, worrying the agriculture industry with tweets like this:

A lot of fun meeting Rachel Parent, a great advocate for #GMO labelling. We’re with you, Rachel! #cdnpoli #NDP pic.twitter.com/0tv9it4Zwt

But then again, there was also the 45 minute meeting Conservative Health Minister Rona Ambrose had with Rachel Parent earlier this year, in which Ambrose committed to setting up meetings between senior health officials and the 15 year old girl who has been raised to fear everything around her.

Agriculture needs to be ready. The fight has been on for years, and many of us are sure that solid science and rigorous testing will mean the license is there for us to continue to do what we’ve done for generations — produce great products, while leaving the soil, the environment and the farm in better shape than how we received it.

But that trust — that ‘social license’ — we have had for years is no longer good enough. Just growing it, raising it or producing it isn’t good enough.

That’s not to say farmers aren’t still respected in society, but frankly, as long as the food that a consumer wants is on the grocery store shelf at the time and price they want it, most truly don’t care about the rest.

They might be concerned about bee populations if a loaded survey question asked if they were worried. They might say they’d be happy to spend more on local food, only to realize later that ‘more’ wasn’t really in the budget the week they hit the shelf.

So it is our job to help make some of these connections. High quality, safe and affordable food is what farmers are producing. It’s activists who are using slick campaigns and attractive celebrities to help you find the highlighted ‘Donate’ button.

Seeing the seams of activist wallets ripping is frightening, but together, those of us in the fields and the barn, can help lift the veil and show that today’s activism isn’t about doing good. It’s about selling fear and making money. And lots of it.