After significant market research in China, Japan, Mexico and right here at home, Canada Beef, a national advocacy group, announced that it has determined what consumers, importers and processors like most about Canadian beef — it’s Canadian.

Now, that may seem obvious. Maybe even simple. But what it’s Canadian really means is a huge question, with billions of dollars riding on it.

For example, Ontario Premier Kathleen Wynne is just back from a trade mission to China with $2.5 billion in agreements, some of which are agricultural and directly connected to the perception that Canadian products are superior – in part, because they’re Canadian.

And at last week’s Ontario-European Forum, hosted by the University of Guelph to connect agri-food business for investment and trade, branding expert Jo-Ann McArthur noted how branding increases a product’s value exponentially.

“Made in, made by, since…these are terms that all matter to all consumers,” she says.

McArthur noted that when chicken farmers considered branding, their research revealed 85 per cent of consumers considered it important that farmers were identified with the product. That thinking resulted in the popular “Raised by a Canadian farmer” brand for chicken.

Others have caught on. Consider the price of branded potatoes versus their generic counterparts. It’s not unusual to find them three times more expensive than non-branded potatoes. People think there’s value in seeing photos of the farmers who grew them or the farms they came from. Farmers who market accordingly can benefit significantly from this perception.

“Stories evoke emotional response, and people are buying products with a story.”

We’ve seen this phenomenon develop in the beverage market too. Even beer drinkers, who have long held out for cheap prices, are leaving behind the old faceless brands behind and opting for craft beer (or what they perceive to be craft beer), produced not by mega multi-nationals, but instead by good ol’ folks just like them.

On the liquor front, even the Liquor Control Board of Ontario opened a lot of eyes when in May it named Rheault Distillery’s Loon Vodka best Ontario-made product.

All these are very good stories.

Said forum speaker Professor John Cranfield, chair of the Department of Food, Agricultural and Resource Economics at the University of Guelph: “Stories evoke emotional response, and people are buying products with a story.”

So if it’s Canadian is what people like about Canadian beef, chicken and other agri-food commodities, then the agri-food sector needs to figure out how to bundle that brand, package it and present it as a matter of course.

For its part, Canada Beef is giving it some thought.

“People around the world have a strong identity for Canada and Canadians,” Canada Beef brand officer James Bradbury wrote in the organization’s regular update last week. “They understand that Canada has a unique environment with lots of land, water and clean air, an environment that…shapes our values and inspires our work.”

Perception, fact, emotion — it’s all in there.

All this talk of branding Canadian agriculture and food is particularly relevant right now. In giving newly minted federal agriculture minister Laurence MacAulay his to-do list, Prime Minister Trudeau urged the minister to develop a food policy, and put some teeth into a value-added investment fund to attract capital and create jobs in food processing.

That represents a grand opportunity to likewise spend some time and money thinking about developing a Canadian brand, and marketing it. Not that the agri-food sector should solely leave this job to the federal government – it shouldn’t, and the sector must be consulted repeatedly. But the brand can’t be commodity specific. It must have meaning for any Canadian agri-food product. It’s a job for the feds.

“Somebody has to herds the cats,” branding expert McArthur told the Guelph forum.

She had another intriguing idea. Why not, she asked, have this brand in place by Canada’s 150th anniversary, in 2017? It would take some determination, but really, there’s time to meet that kind of a deadline. The unveiling of the Canada brand could be part of the celebrations, rolling out ceremonially with all kinds of pomp and adoration. Another unifying symbol for the country. Perfect!

Besides all the feel-goods traits about water, air, the environment and values, the Canada brand must somehow reflect innovation. Forum participant Ezio Di Emanuele, now a senior advisor with the accounting and business consulting firm MNP, says innovation entails developing new products, technologies, processes and strategic alliances, to stay ahead of the competitiveness curve and remain profitable.

He says we know Canada and the EU are going to do more business, including a significant amount more in the agri-food arena. After all, an agreement’s in place. So why are Canadian agri-businesses waiting for someone to do something, or tell them what to do, before they begin working on market development there? It’s already been done. Di Emanuele evokes the famous quote from Wayne Gretzky, about not going to where the puck is, but rather, to where the puck will be. Increasingly, the agri-food trade “puck” will be played between Canada and Europe. That forward-looking approach catalyzed the entire Guelph forum, which pretty well filled expansive Peter Clark Hall with participants from far and wide.

Of course, a Canada brand would be helpful for companies interested in developing markets abroad. But there’s a lot of work that can be done between now and then. That’s particularly true when it comes to adding value to raw products. Canada is notorious for low-value shipping commodities and buying back finished products at a much higher price, to the peril of our trade balance.

Innovation has worked for branding certain Canadian products. At the Guelph forum, researcher Cranfield noted how one of the University’s greatest research success stories has been the development of enhanced omega-3 products, particularly milk and eggs. They’re examples of how health promotion and disease prevention can actually resonate with the public, if presented properly. Cranfield recounted a personal experience with one of his elderly relatives, who shuns the likes of omega-3s in the form of supplements “because he doesn’t like taking pills…he thinks pills are for old people, and he doesn’t want to think of himself as old.”

Given our country’s commitment to research, this discussion underlined to me that the Canada brand has a big opportunity to boast about how research underpins products developed here – not just in the actual product, be also areas that support its development, such as animal welfare and soil conservation.

Brand expert McArthur urged Canada to take some big lessons from Ireland, which has launched a branding campaign called Origin Green that speaks to many of the same virtues that attract our admirers.

In it, a narrator urges the Irish food sector to all sign up. “Many of the things we need to do for sustainability are already in place,” she says.

Same with Canada. But before we sign up, let’s catch up. It’s time. 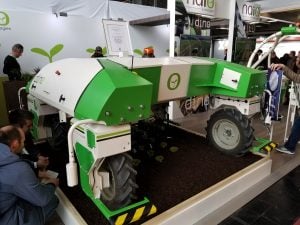 Naïo Technologies' autonomous weeding robot for vegetable production is heading into 2020 with an improved offering — it is now able to weed around plants, as well as between rows. "We want to offer one solution for farmers who [don't] want to use herbicides. Mechanical weeding is a huge task — they spend a lot…Read more »

Foreign Workers Develop into Skilled Labourers. Why Send Them Home?

Who is obliged to present the other side? Journalism, farming, and fact and fiction

One thought on “Needed: A brand that shouts “I’m Canadian!””