The Canadian Grain Commission is proposing the creation of two new wheat classes and the elimination of two classes. The CGC is also looking to delay the removal of 29 varieties from the Canada Western Red Spring (CWRS) and Canada Prairie Spring Red (CPSR) from 2017 to 2018. 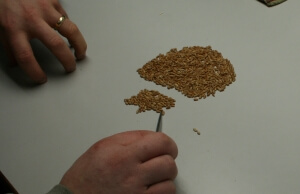 After consulting with the Western Canadian grain industry, the CGC is suggesting the creation of “Canada Northern Hard Red” and “Canada Western Special Purpose” classes as of August 1, 2016.

As the CGC’s Daryl Beswitherick explains below, the changes would increase the classification system’s flexibility, as the two new classes ensure that any wheat variety can be designated to a class.

“Coming forward through the variety registration system, any variety would have a class that it could be designated to,” he says.

The CWPS class would have no quality parameters and include registered varieties for which no quality data has been provided by the variety registrant.

The re-designation of 29 CWRS and CPSR varieties originally planned for August 1, 2017 would also be pushed back to August 1, 2018 to allow the value chain more time to prepare.

Beswitherick says they’ll be consulting with industry over the coming months.

“Early in the year we would like to move forward with a solid plan and start notifying industry of the final outcome,” he says.

Anyone wishing to share feedback with Beswitherick or the CGC can reach him at 204-983-4627.

No surprise as canola acreage increases in latest StatsCan report