When we were kids, SPAM wasn’t a big meal item for us – but we did have it once in a while and I always loved a good SPAM sandwich. How taste buds change. I can’t handle the stuff anymore.

I also am getting fed up with the spam that supposed animal rights activists are feeding people through social media. 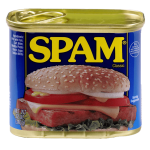 Since starting #farm365 on January 1st, the activists haven’t been happy. They weren’t happy with the positive media coverage of a farmer opening up the barn doors for people to see in. After all, they likely knew that when people saw what was actually happening on a farm – the propaganda would start to look a lot like, well propaganda.

In true activist fashion, one of the goals is to make their cause look bigger than it actually is. Scream the loudest, go to a lot of protests (even if there are only two or three of you there) and now thanks to social media, clearly create as many profiles as possible and post the same thing over and over again to try to build an audience.

After receiving many interactions with activists very concerned with some of the pictures I was posting (feel free to take a look at any of them here…nothing to hide), I started to notice a trend in language and hashtags. The messages seemed so similar from one week to the next that it was hard to tell the difference, even if there was a different username and profile picture at the other end.

I started to follow it closely and found ten accounts with different usernames that really liked tweeting the same thing.

For instance, one saying: “How disgustingly desperate are farmers to glorify exploiting animals with sexism?! #GoVegan #farm365 #AgMoreThanEver” was tweeted nearly 400 times by these ten accounts in six weeks. They stole pictures from a very revealing German calendar and posted over and over and over again. And to top it off, those ten accounts would retweet and like each other’s messages, trying to boost each others rankings — a clear violation of Twitter’s own rules that define spam as:

(While I’ve reported to Twitter the issue of spam, it’s clear the company’s CEO is right – they suck at dealing with abuse. Too bad his comment in February about addressing the issue seemed more about show than action.)

The fact that all of these accounts post identical tweets like this one on a regular basis shows just how far activists are willing to go to make their cause look far bigger than it actually is. It also should give farmers a boost, realizing that what may look like quite a few bodies appears to only be a handful that are quite happy to preach their beliefs of compassion while attacking the very farmers that are willing to open up their farms to the online public.

I’d almost expect to see an activist post Mark Twain’s words on their wall at home: “Never let the truth get in the way of a good story.”

For farmers, we can do better. It’s a handful of activists on one end of the online world with thousands of farmers, veterinarians, bankers, truck drivers and more that can show what goes into food production – whether that be beef or milk, carrots or wheat. After all, our unique messages, about the collective good of agriculture, make a far better story than the same message 400 times.

One thought on “Fed Up With Vegan Spam”