2015 hasn’t necessarily been a great year for grains complex, let alone anyone who works in the commodity sector. The most watched fall from grace came in the form of oil prices continuing to be pushed lower by sustained production highs by the likes of O.P.E.C. and the U.S.A., who also just recently announced they’re scrapping their oil export ban, which will certainly keep American wells flowing. Accordingly, the Canadian Loonie has fallen almost 16% in the past year to now around 72 cents USD. The US increasing their interest rates in December has also put pressure on the Canadian Loonie, and if the Bank of Canada doesn’t step up to defend the $1 coin, levels between 65 and 70 cents like we saw in the 1990s isn’t outlandish. 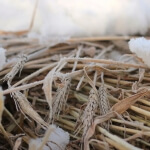 Granted, this is positive for grain exports as it becomes cheaper to source Canadian supply, the law of diminishing returns suggests that domestic prices that you’re getting can move higher but only so much before they become competitive again with other options. Options like European or Black Sea wheat, or possibly even Argentinian wheat, as with the recent removal of wheat export tariffs there by the new government, Egypt bought their most recent few boatloads from the South American country!

All things being equal, the decline of the Canadian Loonie has helped Canadian basis levels improve a bit. This in mind, it’s important to be cognizant of where basis levels were when the Loonie traded this low (currently at around 72 cents, we’re speaking pre-2005) and futures prices were doing at that time as well. Oats futures were trading between $1.50 – $2.00/bushel, Chicago wheat was flip-flopping around $4, soybeans were volatile between $2 & $4/bushel, corn had a $3 in front of it, and canola was sliding down to almost $200/tonne in Winnipeg (reader beware: this was before Asia/China’s demand for veggie oils started picking up).

Tracking over into the oilseeds market, soybean prices will likely continue to be suppressed with the large supply coming out of both South and North America. Given the decline in the values of both the Brazilian Real & Argentinian Peso, down 32% and 34% respectively in 2015, it’s not hard to figure out where the cheapest product is. Even the Ukrainian Hryvnia is down 34% this year, making corn and even wheat from there one of the cheapest in the game.

On corn side of things, there’s a fair amount of corn out there, which will keep prices in Chicago around $4/bushel, but any weather events could quickly add 5-10%. There’s been speculation that with the removal of corn export tariffs as well in Argentina, corn production down there could top the previous record of 27 million tonnes. Given the cheap ocean freight (another “good” that’s taken a huge tumble this year), Asian countries looking for any coarse grain could easily source from cheap options in Argentina, versus more expensive American supply.

Onto pulses, the second consecutive year of lower production in India will continue to support strong Canadian prices, especially with the Canadian Loonie adding an estimated 10-15 cents/lbs extra to domestic values compared to a year ago (meaning lentils and peas will more than be the money crops in 2016!). We estimate that Western Canadian lentil acreage in 2016 will top out somewhere between 4.2 – 4.3 million acres, with peas area somewhere near that as well. Keep in mind that production elsewhere will intuitively increase, with the U.S. adding more green lentil acreage & Black Sea looking to add to its peas production number.

For the likes of oats and barley, current supply and demand levels will likely keep a cap on any significant price moves. Keeping things relative, feed barley prices are marginally higher than where they were a year ago and there have been some strong values that have been worthwhile to take advantage of. Will we see the usual seasonal spike in the spring months? Probably but the amount of barley that didn’t make malt, plus the amount of feed wheat also available, feed prices are more likely to be pressured into the 2016 growing season. Granted, if meat supply/demand tables change (i.e. a BSE-type scare), the fundamentals intuitively change.

Wheat seems to be sitting as the duck with the most water in front of it. Despite the record size of supply available around the world, the supply and demand tables have been swinging around what most would consider an equilibrium price point. The market seems to believe that there can’t really be much more downside on the futures board. Given the recent weather issues the American south is experiencing, a fair amount of winter wheat acres could be lost. Granted Europe looks to potentially be on track for another 150 million tonne crop, issues around the conditions in Eastern Europe & Black Sea before the winter crop headed into dormancy.

On that note, from an outlook standpoint, the watchful eye continues to be on weather – namely El Nino effects persisting over winter months and the early suggestions of a La Nina event later in 2016. While we do have a lot of supply across most major row/futures-traded crops, we could see some demand pick up in veggie oils as production in Asian countries of palm oil & other oilseeds will be curtailed compared to previous years. With canola tracking soy oil levels closely, and with Canadian Loonie suppressed, we might see $500/MT canola levels back before the start of Plant 2016.

The dry year that many areas in Western Canada experienced was saved by some wetter weeks in September & October, but the outlook seems to point towards a drier spring for the region and U.S. northern states. While the old saying, “Plant into dust, bins will bust” immediately comes to mind, plant root systems were already extremely deep this year and many agronomists agree that in the driest areas, crops were saved by the cloud/smoke cover from forest fires in the north (How else can you explain the canola yields in parts of Alberta & Saskatchewan that appeared written off?).

From a tracking standpoint on the futures board, canola has actually performed the best, up over 11% from January 1st, 2015, while oats has been the worst, down more than 31% since the start of 2015. Wheat prices in Kansas, Minneapolis, & Chicago have all seen a decline of more than 20% on their bourses, tracking lower with corn who has seen a drop of 16% in 2015. Finally, soybeans have only dropped around 13%, thanks to sustained demand in Asia (AKA China) and demand level likely will continue increase as the size of the middle class (and diets) continue to change there.

Overall, the fundamentals suggest that we need to work through the current supply of grain that we do have. The last year of decline in grain prices is solid proof that we’re in a downturn of the commodity price cycle. We should expect this to continue for likely a few more years. This isn’t to say that prices will keep trending lower, but more so that the values we see this New Year may be similar to what we see to start 2017. Again, we think that pulse prices will remain well above their 5- and 10-year averages while wheat likely has room to run around 10% higher in 2016.

Corn and soybean prices will remain pushed down against the large inventories that exist globally, but any weather events could add 5-10% to values. From a basis standpoint, it’s hard to argue aggressive further downside for the Canadian Loonie and should it, and futures values rise, basis levels will pull back. As we think about 2016, the combination of basis, cash, currency, and futures will all be factors that we need to keep on top of.

Happy Holidays & looking forward to helping you understand the grain markets better in 2016!