The Canadian Food Inspection Agency (CFIA) recently released its report on the 19th case of bovine spongiform encephalopathy (BSE), concluding the likely cause was contamination of feed on-farm.

“The carry-over of a small amount of residual contaminated feed associated with an earlier case (17) on the same birth farm is the most plausible explanation for BSE case 19.”

The (case 19) animal, a black angus female, was confirmed BSE-positive on February 11, 2015. She was 5 years, 10 months at the time of diagnosis, and was born 20 months after the implementation of the enhanced feed ban in 2007, on the same premise as case 17.


Ian Giebelhaus, veterinarian and Alberta Agriculture BSE representative, with responses to: the conclusion of the 19th investigation, the ‘shoot, shovel and shut up’ argument, why the U.S. isn’t finding BSE and the importance of keeping BSE test numbers up.
According to the CFIA’s website, the investigation followed the guidelines set out for countries with Controlled Risk Status, involving:
Feed: all sources of feed to which the infected animal was or may have been exposed during its first year of life;
The feed cohort: all cattle which, during their first year of life, were reared with the BSE case during its first year of life, and which investigation showed consumed the same potentially contaminated feed during that period; and/or
The birth cohort: all other cattle that were born on the same farm and within 12 months of the infected animal’s birth.

Why has the investigation taken over 9 months to conclude?

The investigation has been extensive, due to the size of the birth and feed cohorts, the number of feed sources, and some traceability set-backs.

According to Ian Giebelhaus, veterinarian and Alberta Agriculture BSE representative, Canada has the best traceability system in the world, but “there are times when that system falls apart.”

When an animal with a registered tag dies, for example, the owner is expected to ‘retire’ the RFID tag number. If that doesn’t occur, it is assumed the animal lives on. Somewhere. Investigators refer to these animals as “ghost cows;” the achilles heel of the traceability system.

To those of us with cattle, it serves as a powerful reminder of the importance of recording and cross-referencing tags, and updating the Canadian Livestock Tracking System (CLTS) database anytime a tag is replaced, or needs to be retired.

Under the current World Organization for Animal Health (OIE) standards, Canada will be eligible to apply for “Negligible Risk Status” 11 years after the birth of its last case of BSE, which brings us to 2020. Until then, our BSE status under the OIE will remain at “Controlled Risk.” That is, if, and only if, we continually meet the requirements outlined in the Terrestrial Code, including standards around testing. 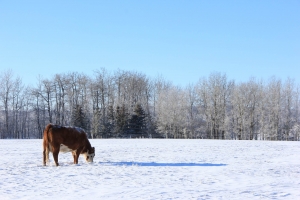 “It’s a combination of testing 30, 000 head and testing the right cattle,” says Giebelhaus.

‘The right cattle,’ as Giebelhaus describes them, are those that provide the highest points under the OIE’s quality assessment (point) system. That means cattle over 30 months of age, who are one of the Four D’s — dead, down, dying or diseased. Additional points are given to those that come with a good history, including verified age.

If every beef or dairy farmer in Alberta did one sample a year, we would greatly exceed our numbers. Unfortunately, we’re not even close.

Perhaps Alberta Agriculture’s website‘s example is the best: “a 4-year old animal exhibiting neurological signs consistent with BSE would be assigned the highest value (1,741 points); while healthy yearlings sampled at routine slaughter…[have a] value of no more that 0.01 points.”

Should we fail to meet these standards, we risk falling into the “Undetermined Risk Status” category, a move that could severely the Canadian beef brand.

Is BlackJack Safer than Pesticides?

Farmers Business Network (FBN) has acquired Haplotech and Cibus' Canadian canola breeding program — a pair of moves that show the online crop input retailer and farm data aggregator intends to shake up the canola breeding and seed market in Western Canada and the northern U.S. "We have entered the seed business in the U.S.…