“The lifestyle benefits for smaller farms (120 cows or less) are just wonderful. It completely eliminates the drudgery of having to be there at a fixed time seven days a week,” says Rodenburg, who now runs his own robot consulting company, DairyLogix.

Speaking at the recent World Dairy Expo in Madison, Wisconson, Rodenburg told US farmers that Canadian farms using milk robots could expect to achieve a 30% to 40% labour savings. A recent Dutch study pegged average labour savings at 29% for robots compared to milking parlours.

Farms at the top of the labour-savings list typically have a number of things in common, says Rodenburg. Barns that “really hit the number” have facilities for separating and handling cows, and facilities for dealing with special needs cows – fresh or lame cows. (continues below)

Cow comfort is also critical for dairy robot success. Cows need to be comfortable and have healthy feet. That requires adequate free stalls that are “good-sized with a comfortable base.”

In a robot barn, lame cows can practically bring the system to a halt, notes Rodenburg. “A lame cow is not going to go to the robot on her own, so she becomes a fetch cow. She only milks twice a day and production suffers.” Adequate manger space is also a must so all cows “can eat pretty much at the same time without having to fight for space.”

When it comes to cows per robot many farms target 60 to 65 cows per robot, “but we’re learning that the tipping point is probably closer to 55,” says Rodenburg. “Life will be easier for you and the cow if there’s more time on the system.”

Will robots ever revolutionize the US dairy farm? The technology has failed thus far to gain a solid foothold there, mainly due to farm size, robot cost and fluctuating milk prices. “But it’s starting to happen in big way,” says Rodenburg, adding that it’s always easier when milk prices are higher.

“Even if the milk price is low and you lose less money with a robot than paying people to do it, it’s still a better option,” says Rodenburg. 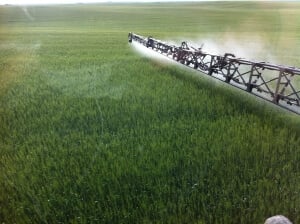 Tough fungicide decisions ahead for wheat growers in 2019

It's no secret that the Prairies have been for the most part very dry. When the wheat crops needed it the most, the rain wasn't falling. There has been some moisture in the last couple of weeks, as many fields are headed into flowering. But what does that mean for your fungicide applications? RealAgriculture Agronomist…Read more »

Canadian dairy group to advocate on trade, nutrients, and the environment