Dairy — milk, in particular — is facing big challenges from the likes of pop companies and juice manufacturers. They’ve marketed their way into the lunch buckets of Canadian children over the years, and taken hold. A study underway now by University of Guelph researchers has found milk is not considered cool by adolescents, one of the groups that need it most.

Efforts are underway to buck that trend. Ottawa is considering legislation to restrict all marketing targeted to children (under the age of 13) of foods and beverages high in saturated fats, trans-fatty acids, free sugars or sodium.

In the interim, it wants the food industry to immediately cease marketing such food to children.

And at the University of Guelph, with support from the Dairy Farmers of Ontario and the partnership between the Ontario Ministry of Agriculture, Food and Rural Affairs and the University, researchers are developing interactive, online learning tools about nutrition, designed to appeal to grade-school students and teach them why the likes of milk and alternatives are good for them. 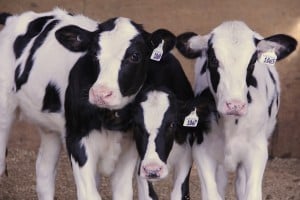 Simultaneously, efforts to protect the integrity of Canada’s dairy system are being instituted on the farm, too. For the first time ever in Canada, researchers have taken the pulse of the sector by conducting what they call The National Dairy Study 2015, a cross-country initiative looking at matters such as dairy health and herd management.

It’s tied in with new voluntary codes of practice, being led by the Dairy Farmers of Canada. These codes are focused on all areas of animal production.

Like other food producers, dairy farmers need a benchmark, some way to measure progress. And the food animal health sector, which includes veterinarians, needs to know the status of the nation’s herds, to help it predict what it might expect on the horizon in areas such as health, nutrition, and disease prevention. The national study addresses both needs.

The study is being coordinated at the University of Guelph, with Prof. David Kelton, Ontario Veterinary College, at the helm. Kelton and a 20-person team spent the spring soliciting responses mostly online from dairy farmers across Canada, to a comprehensive 40-page survey designed to offer a clear snapshot of producers’ activities and attitudes, and reveal how to reach them.

The team had responses from 1,300 dairy farmers of all kinds – conventional, organic, those using robotic milkers and those with traditional tie-stall operations, among them — in all 10 provinces.

They’re analyzing the results now. But Kelton says a couple of points have already made heads turn.

The first is the number of cattle moving on and off farms. For many years, starting back in the late 1960s, dairy farms were trying to stamp out some persistent animal diseases, such as brucellosis and tuberculosis. These diseases are known to travel, so producers closed their farms to new animals, and didn’t take members of their herd to competitions and shows.

Now, that’s changed. The study showed 47 per cent of dairy farmers brought new animals onto their farms last year. And a quarter of all farmers had cows or calves that left the farm, then came back.

Kelton’s not sure why the attitude towards closed herds has changed, but if a disease outbreak occurs, it’s important to know how much it might get around.

The researchers were also surprised at how many dairy farmers were active on social media, and the number willing to share their twitter handles. “Knowing this, we can use social media for discussion and exchanging information with them,” says Kelton.

More information from the survey will be released into 2016. But already, the picture is getting clearer about new directions being taken by Canadian dairy farms.

CowSignals: What Bessy’s Body Language Can Tell You