A short season soybean variety that helped drive Japanese demand for Ontario soybeans has been named the 2015 “Seed of the Year — East.”

Maple Glen was developed at Agriculture and Agri-Food Canada’s Plant Research Centre in Ottawa by Harvey Voldeng and Elroy Cober and released in 1987 as a food grade soybean variety. More than 1.2 million acres of it were grown in the following decade. 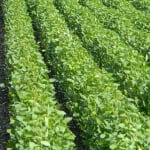 “The most important part of Harvey’s contribution was that he was the first breeder to develop ‘home grown’ lines of soybeans for the short season areas of Ontario,” explained Martin Harry, eastern marketing manager for SeCan, in the announcement. “Soybeans are vital to Ontario’s agri-food economy. Ontario farmers produced $2 billion worth of soybeans in 2014.”

Desired for making tofu, Maple Glen was the most successful variety in the Maple series of soybeans developed by Voldeng to stand up to Eastern Ontario weather. Previously soybeans could only be grown in Southwestern Ontario.

The “Seed of the Year” competition is open to any publicly-developed variety and is organized by SeCan and the University of Guelph with support from the Ontario Ministry of Agriculture, Food and Rural Affairs, and Agriculture and Agri-Food Canada. The Canadian Seed Growers Association, Quality Seeds Ltd., Ontario Asparagus Growers, Ontario White Bean Producers, Canadian Seed Trade Association, Snobelen Farms, Grain Farmers of Ontario, Fruit and Vegetable Growers Association, and the Ontario Potato Board are also sponsors.

Pulse School: Which Input is the Most Important for Max Pea Yields?

Beef Market Update: Talking markets from the back of a horse

This weeks' episode of the Beef Market Update is coming to you from the back of a horse, which is likely as authentic as we can get while we're talking cattle markets. Anne Wasko, of the Gateway Livestock Exchange, is moving cattle, as yes, we approach October. In the U.S., Wasko says this week is…