Pea prices in Western Canada are at record levels and showing no signs of weakness, largely due to the pulse crop shortage in India. 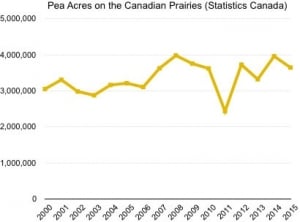 “At this stage of the year I don’t think farmers have ever had an opportunity to sell next year’s crop at $9.50 to 10,” notes Chuck Penner of LeftField Commodity Research in this Pulse School episode concentrating on the never-before-seen situation in the pea market.

As with lentils, poor crops in India have driven prices sky-high, leading to strong interest in planting pulses on the prairies in 2016. While there’s some discussion about growers favouring lentils over peas, Penner says we could see record yellow pea acres.

“I think in the eastern and northern acres of the prairies, where lentils are less well-suited, that’s where we’ll see the pea acres really boom,” he explains.

And it’s unlikely prices will suddenly drop off, says Penner.

“Anytime prices dip at all Indian buyers will be in there sucking up those peas. We’re not worried about prices cratering,” he says. “At some point new crop prices will start to tip over — once buyers are comfortable and say they have enough for at least the start of next year.”

Good luck for grains — This week in the grain market

CN Rail says a bridge fire in northwestern Alberta is expected to shut down rail traffic in and out of the Grande Prairie area for an unknown amount of time. The fire occurred at a large bridge on the Grand Cache subdivision near Latornell, Alta. early in the morning on Wednesday, October 5, affecting traffic…