December 2, 2015May 2, 2019
There’s something unique about the Speckle Park cattle breed that’s catching attention in Canada and around the world.

In the video above, Rod Remin explains how the Speckle Park breed originated near Maidstone, Saskatchewan in the late ’50s when Angus cattle and Appaloosa horse breeders Eileen and Bill Lamont bought a speckled heifer from Mary Lindsay of Greenstreet, Saskatchewan. Interest in the novel-looking animals continued to grow, with Speckle Park receiving “distinct breed” status in 2006.

“4-H kids have been really great for promoting this breed. Grandpa buys the kid a Speckle steer and the next thing is they have a Speckle heifer and it’s only a few years before they start breeding more,” notes Remin.

While Speckle Park animals carry many of the efficiency and meat quality traits of Angus cattle, their distinct, eye-catching appearance makes them unique.

Where does the Speckle Park name
come from?
Both parts of the name chosen by
Bill and Eileen Lamont refer to the
animals’ colour pattern:
“Speckle” because of the spots and
“Park” because some Speckle Park
have the British “white park” colour
pattern — a white body with
coloured points on the ears, eyes,
muzzle, lower legs and teats.
Source: CSPA
“My personal opinion is if you did a DNA test to determine the breed it would come out Angus. That’s how important Angus are to us,” he explains.

The breed is also moving beyond the purebred breeder and 4-H show level, with commercial producers appreciating Speckle Park characteristics, he says. 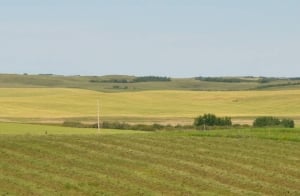 Manitoba's government has revived its plan for a flat $25/tonne carbon tax, which will coincide with a one per cent drop in the provincial sales tax (PST) to take effect on July 1st. Premier Brian Pallister made the surprise announcement, referring to the carbon tax as a "Green Levy," on Thursday — a few days…Read more »

Beef Market Update – Have We Seen the Canadian Spring Highs Yet?

Agriculture should welcome evidence-based consultations — and demand more of them