It’s been said a thousand times already, but if you ask Saskatchewan farmer Gerrid Gust what his take-home message was after visiting customers in North Africa and the Middle East, he can’t help but emphasize the importance of maintaining Canada’s reputation for quality and consistent supply.

Following the end of the Canadian Wheat Board’s single desk presence in 2012, the Canadian International Grains Institute, Canadian Grain Commission and Cereals Canada have organized “new crop missions” to meet with customers each year after harvest quality data is compiled. For the 2015-16 crop year, Canadian delegations with representatives from Cigi, the CGC, Cereals Canada, grain companies and farmers such as Gust visited twenty countries in Asia, West Africa, the Mid-East and North Africa, Europe, South America.

This year “Team Canada” explained how the 2015 crop has higher protein content and better grade distribution than in 2014. Despite some issues with mildew and fusarium similar to last year, the majority of both Canadian Western Red Spring and Canadian Amber Durum is in the top two grades with protein levels exceeding the long-term averages.


However, it’s not all about providing technical information to buyers. The Canadian delegations also sought feedback from customers to share with the Canadian industry.

“It was a great opportunity to see what durum buyers in North Africa and the Middle East are looking for, what hard wheat buyers are looking for in West Africa and to try to give them a sense of what our conditions are back in Canada,” says Gust in the interview below, after participating in the new crop mission to Algeria, Morocco, Dubai, the Ivory Coast and Ghana. The last two are not major buyers of Canadian wheat, but they were added to the new crop mission this year because they are seen as potential markets, according to Cigi’s CEO JoAnne Buth.

So what did Gust learn from the trip?

“The whole thing about the consistency of our product — I really understand that better now,” he explains. “The bulking handling system that we have in Canada is really a cornerstone of our quality and consistency, and just everything we do as far as varieties and how different varieties mill and bake differently and what customers are looking for, why we can’t just grow the best high-yielding crop if the dollars won’t net out.”

As for customer concerns, CGC officials outlined their plans to create a new wheat class to alleviate issues with lower gluten strength in CWRS wheat. Gust says they also heard questions about better price discovery for durum in Algeria, Morocco and Dubai and lingering concerns about the shortage of good quality durum produced in 2014. 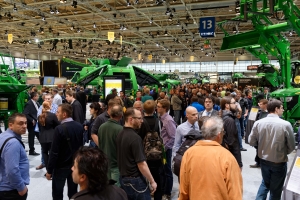 Agritechnica still set to go in 2021, but without John Deere

The world's largest trade fair for agricultural machinery, Agritechnica, is still slated to take place later this year as planned. The organizer of the biennial show, DLG (German Agricultural Society), expects more than 2,000 exhibitors in Hanover, Germany from November 14 to 20, 2021. An accompanying online platform "Agritechnica digital" will begin in May. "The…Read more »

Chasing Targets — This Week in the Markets

Accounting For Everything — This Week in the Grain Market