J.P. Gervais, chief agricultural economist for Farm Credit Canada, in conversation with RealAgriculture’s Debra Murphy at the 2015 Canadian Forage and Grasslands Association Conference in Saskatoon, Saskatchewan (before mCOOL was repealed).

2015 saw some pretty incredible market pressures in the livestock sector, amidst overarching trade stories with the ongoing battle over country-of-origin labeling and the conclusion of the Trans-Pacific Partnership negotiations. But what’s ahead for livestock markets looking into 2016? And what will it mean for hay and feed demand, both at home and internationally? 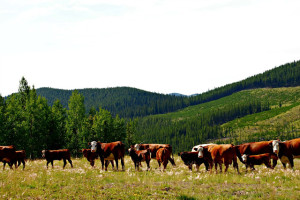 Well, if you’re a cow/calf operator, you’ll still be expected to turn a better-than-average profit, according to J.P. Gervais, chief agricultural economist for Farm Credit Canada. For finishers, margins will continue to be a little tighter.

“…I think one of the challenges, if there’s one,” Gervais said in this interview with RealAgriculture,” would be that beef prices are starting to come down a little bit.”

Lower prices, Gervais says, are largely driven by the United States, where supply is high thanks to heavier market weights and higher import numbers.

For dairy, the biggest challenge right now is related to increased demand for butter, which in turn requires increased milk production. It seems counterintuitive, but alongside the production of butter comes a product referred to as “solids non-fat” or SNF. Right now, says Gervais, imports of other proteins from the U.S. are displacing SNF demand in lower value markets, such as animal feed. Combine that shift with the trend to lower world milk prices (as much as 20 percent of all milk in Canada can be priced at world price levels), and it’s no wonder dairies are feeling the impact of declining margins.

Hog herds have been rebuilding in the States, after the painful trials with PEDv. The futures markets are suggesting margins will stabilize and even become slightly positive for hog producers. The weak Canadian dollar has benefited producers north of the border, notes Gervais, adding the big question now is whether or not China will begin to demand more pork, after a huge liquidation of the herds there in 2015.

Feed costs are likely to decline slightly into 2016, says Gervais, and the market in western Canada, where prices for hay skyrocketed, will likely correct itself shortly.

The weak loonie may also open new export demand, but long-term demand growth cannot rely on the currency’s current status, says Gervais. He left delegates at the Canadian Forage and Grasslands Association Conference in Saskatoon contemplating one very important question going into the new year: should Canada develop an international presence as a premier supplier of hay and forage?

“What matters long term is growth in demand for our products, which is a function of income growth in other countries. We think emerging markets are doing well in that sense,” he explains, noting Canadian producers also need to maintain a focus on productivity. “We need to not fall in the low Canadian dollar trap and think everything’s going to be great because we’re competitive because our currency has lost value.”