Regulatory restrictions are not on the radar in Manitoba, but the province’s agriculture entomologist suggests farmers in Western Canada should ask themselves “why?” before using neonicotinoid seed treatments.

The Ontario and Quebec governments are restricting the use of insecticide-treated seed in response to concerns about neonics hurting bee health, but there haven’t been the same problems with pollinator populations on the Prairies (and it turns out bee deaths dropped before new rules took effect in Ont).

It’s the surface water residues from neonic use that could be an issue in Western Canada, according to John Gavloski of Manitoba Agriculture, Food & Rural Development.

“One issue that we do share is the surface water residue issue,” he explains in this video filmed at Ag Days in Brandon. “There have been a couple major studies released recently that show you can get quite high spikes in surface water residues of neonics, especially after heavy rainfalls right after seeding. That is a concern.”

A study published in 2014 found detectable neonic levels in the majority of 134 Saskatchewan wetlands surveyed following seeding. Gavloski says the surface water residues are the a result of the volume of neonics being used, as they’re registered for use on canola, cereals, pulses, corn and soybeans — most of the large acre crops grown in Western Canada.

“We really do have to start asking ourselves ‘why are we using them?’,” he says, noting there are legitimate insect concerns, such as flea beetles in canola, as well as wireworms in some situations, where neonic use is warranted.

While wanting farmers to consider the implications of using neonics, Gavloski says he doesn’t want to see regulations determine who gets to use them, noting the science supporting such rules is lacking.

“The process isn’t fine-tuned. There are a lot of nominal thresholds and science that need to be fine-tuned for us to have any confidence that we’re doing that with accuracy,” he says. “My preference would be to work through education.”

If a legitimate insect concern does not exist, Gavloski encourages growers to seek fungicide-only treated seed.

“The pulses of neonics in surface waters, if we don’t reduce the amount of acres seeded to neonics, those issues won’t diminish, they will keep increasing and that could become the bigger issue,” he says. “If you’re not doing it out of pollinator concerns, maybe surface water residue is a reason to consider that fungicide-only option.” 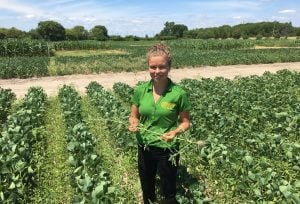 Is the Night-Time the Right Time to Spray?