The Alberta Beef Industry Conference kicked off on Wednesday, with workshops surrounding markets, recruitment, equipment safety and low stress cattle handling. Thursday and Friday saw a long lineup of speakers, covering topics ranging from the role of the World Organization for Animal Health (OIE) to “science-free health and nutrition advice” in popular culture.

“We’re very happy with [the conference],” said Bryan Walton, CEO of the Alberta Cattle Feeders’ Association (ACFA). “It was a full room — we have something like 560 individuals who came to hear our speakers.”

But besides the intense amount of work that goes into putting together a conference of this nature, the ACFA has also been actively involved in an agriculture coalition aimed at providing feedback to Alberta’s Enhanced Protection for Farm and Ranch Workers Act.

Related: FarmTech ’16 — Sorting Out the Details of Bill 6 — Ag Minister Oneil Carlier
The Major Benefit of Bill 6 Legislation in Alberta 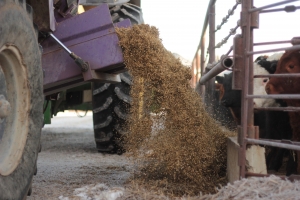 “I think the major point that I would make is that this is about farm safety for all,” said Walton. “This isn’t about — and shouldn’t be about — labour relations, employment standards. It’s about farm safety — getting occupational health right for us and making sure we can get the job done.”

The next meeting for the group is scheduled for early March.

In January, a new tool for auditing animal welfare in feedlots was given conditional approval, and earned Certified Audit status from the Professional Animal Auditor Certification Organization (PAACO). And this week, it received final approval.

The NCFA will now look to educate feedlot operators of the new expectations and criteria, and PAACO will look at opportunities to train certified feedlot auditors.