Maybe it’s due to news traveling faster on social media than it used to, but there have been a fair number of reports of canola heating in the bin this winter.

Producers who find themselves in these unfortunate situations are often left scratching their heads wondering why it happened. 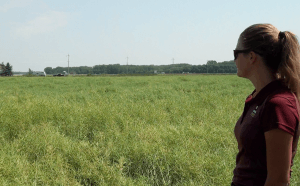 Was it harvested too early? Was it straight-cut or swathed? Was dry-down aid X applied before combining?

Some growers have been wondering whether there’s a correlation between straight-cutting and heating in the bin.

“I wouldn’t necessarily say it’s a straight-cutting issue, but just issues with the seed,” notes Angela Brackenreed, agronomy specialist with the Canola Council of Canada, in this audio Canola School episode.

Timing is critical for minimizing high moisture green seed when straight-cutting and/or applying a drydown aid or desiccant, especially in those variable or stagey fields.

“Heat and Reglone are products that don’t bring on maturity. They basically stop the crop from maturing, so it’s very important to get the timing right because you can lock in green seed if applied too early,” notes Brackenreed.

“I really encourage producers to try to find a field that is a good field for straight-cutting. I think they’ll have a much different experience with it.”