In November, Case IH announced the addition of the 2000 series Early Riser planter, and this week, at National Farm Machinery Show in Louisville, Kentucky, the 2150 saw its first public reveal.

“This new Early Riser planter series provides the first factory integration of Precision Planting components in North America, resulting in what we believe is the industry’s most accurate planter,”said Tony McClelland, planter marketing manager, Case IH, in a November release. “But make no mistake, we didn’t just put a new meter on our current toolbars. This is an all-new row unit designed by Case IH with toolbars engineered to deliver top accuracy at higher speeds.”


Bernard Tobin gives us a look at the unveiling of the Early Rise Planter at National Farm Machinery Show in Louisville, Kentucky. 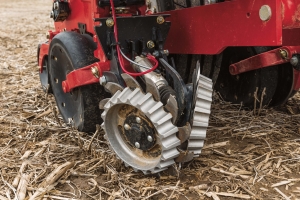 The AFS Pro 700 display allows operators to control integrated precision planting, record data and maps, and even allows up to three video inputs for implement and seed tank monitoring, and/or vehicle back-up.

The first model of the series, the 2150, will be available for the 2017 planting season in 12-, 16- and 24-row, 30-inch front fold machines. If you miss it at National Farm Machinery Show this week, you can check it out at Commodity Classic in New Orleans this March.

Agritechnica 2015: STEP Aims to Give Ag Exporters a Leg Up