Some of the RealAg team (Jason and Kelvin) is Winnipeg this week, along with hundreds of farmers, at the third annual CropConnect conference.

Attendance on day one was up from last year, with speakers (and guests in the RealAg studio) covering topics ranging from the latest UAV tech to struvite fertilizer to sunflower grading.

Roberta Galbraith of the Manitoba Canola Growers joined Kelvin for a quick wrap-up during the RealAg Farmer Saloon on Wednesday afternoon: 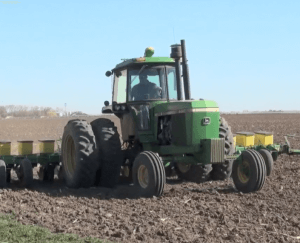 POLL: What is Most Important Consideration in a Tractor Purchase?

As you drive down the highway and see all the planters and seeders getting pulled through the fields you see many different brands of tractors. In some cases its the same tractor a certain farm has had for 20 years while other farms are constantly trading for new models. The decision making of which tractor…Read more »

Ideal Soybean Planting Dates for Manitoba & When to Roll ‘Em

Corn in Rotation — Learn About Manitoba-Specific Agronomics at CropConnect ’15

Rural crime: Know the legal ramifications of your own actions