Just days after debuting as the first Manitoban to compete in the Winter X Games, Josh Penner was back in the shop on his family’s farm near Letellier, Manitoba getting combines ready for the 2016 growing season.

Penner was one of eight competitors to qualify for the freestyle snowmobile event at the X Games — the pinnacle of extreme sports — in Aspen, Colorado. His occupation listed by ESPN on the TV screen: grain farmer.

Unfortunately engine problems during practice forced him to ride a borrowed sled in the competition, where he finished seventh overall.

We stopped by the Penner farm to chat about the X Games, how he got into freestyle snowmobile and how it fits with farming:

RealAg: Getting to go to the X Games, that must have been quite an awesome experience?

It was definitely pretty crazy to be able to compete against the best freestyle snowmobilers in the world. It’s definitely my passion. I grew up racing motocross, as well as farming in between, and I just couldn’t step away from the motorsports world. Snowmobiling fits well with farming because in winter we’re just working on equipment and hauling grain. It’s not as busy as summer where you’re constantly working, so there’s a lot more time for me to go sledding and practice my hobbies.

I’m a very competitive person. I always like to push myself very hard, which leads to fast progression and leading up to X Games and doing shows all around America. One thing leads to another as I keep pushing myself. 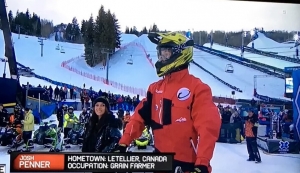 So people sometimes ask ‘what do farmers do in winter?’ Not many can say they compete in the X Games.

It’s definitely something you dream of as a little kid, watching it on TV. It’s pretty wild that I actually made it there. Things didn’t quite go as planned, but it’s cool to say a Manitoba farmer was in the X Games. My Twitter really blew over that and all the farmers around the area liked that.

You say it didn’t go as planned. What was the experience like?

We just had sled issues. I purchased the sled a year ago. It’s my first race sled and it’s the only thing I ride, so it’s really taken a lot…who knows what was going on in the motor. We’re going to strip it down and find out, but we just couldn’t get it to run, and it caused me to crash pretty hard in practice. (Penner ended up borrowing an unfamiliar sled for the competition and finished seventh out of eight.)

The experience though was pretty crazy, just being there with everybody that you look up to. All the TV crews and seeing yourself on the big screen, it’s pretty overwhelming. Getting there was by goal for this year, so even though I didn’t have a good performance and the sled didn’t run good, it still feels humbling inside that I accomplished my goal for this year.

When did you find out you were going to the X Games?

I was the first alternate at first, so I was still going out to train just in case something happened. The guy I was training with — Daniel Bodin from Sweden — was in as one of the main guys. He was training with me at a foam pit and he ended up breaking his leg in the foam pit. So it all happened right before my eyes…I kinda knew before anyone else in the world knew because it happened right in front of me. I helped him go to the hospital…but that’s part of our sport. We risk ourselves and we know we can easily get hurt at any second.

Finally, how do you balance getting stuff done in the shop and on the farm with your passion for freestyle?

I’m lucky to do what I do because we have other guys that work here too — my dad, my two uncles and my cousin. We all like to go fishing and snowmobiling, so we make sure we have a plan. Someone is always around to do the work that needs doing. We always make sure work gets done here first and then we make time for your hobbies.

Farming will be here. Freestyle, I don’t know how long you can do that — as long as you’re having fun and don’t get too hurt, I guess.