Update as of March 3, 2016: The landowners conducting the protest have “retreated” following a commitment, they say, from Manitoba Hydro to move equipment out and clean it. They’re asking to have a third party, possibly the CFIA, ensure biosecurity protocol is followed. Spokesperson Jurgen Kohler says Hydro crews aren’t meeting their own biosecurity standards, which the producers feel are not strict enough to minimize the risk of spreading soil-borne diseases — PED in particular, given the number of hog barns in the area. He says they’re considering holding further protests in the City of Winnipeg.

A group of Manitoba farmers are braving cold temperatures demanding Manitoba Hydro and the provincial government respect their rights as landowners in constructing the multi-billion dollar Bipole III power line.

More than a dozen farmers and landowners have been protesting at the entrance to a construction site on farmland expropriated from Alvin and Tim Wiens north of Mitchell since early Saturday morning.

As Bipole III Coalition spokesperson and Brunkild-area farmer Jurgen Kohler explains in the interview below, biosecurity is one of their primary concerns. He says a crew contracted by Hydro was seen moving equipment between fields without cleaning it on Friday. The movement of both clubroot disease and porcine epidemic diarrhea (PED) virus is a concern in the hog-intensive municipality of Hanover. One of the fields involved had hog manure applied in fall, says Kohler.

“Manitoba Hydro was running roughshod over property rights. They didn’t ask the landowner at all what their concerns might be,” he says.

After gathering Saturday morning, the protestors told the construction crew they would not allow a drill bit to cross into another field without it being cleaned, explains Kohler.

“We were at a standoff into Saturday night and nothing was happening, so people stayed and we prevented the drill bit from going anywhere, and then we found out it got snuck in during the night somehow. On Sunday they started drilling again,” he says, noting the group then prevented a concrete truck from entering the site. 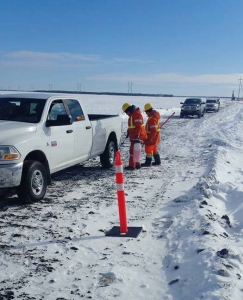 Manitoba Hydro has a biosecurity policy that requires employees and contractors assess biosecurity risks, taking factors such as “soil conditions, the time of year and the nature of their work into consideration.” Loose soil is supposed to be scraped off equipment followed by an application of the disinfectant Virkon if material remains. Biosecurity representatives from the Crown corporation met with the landowner group on Monday.

“We brought all the concerns to their attention and they said they would work on it. They agreed completely with us with all the issues that we raised,” says Kohler.

RCMP have been at the scene and have allowed the demonstrators to maintain their position on the municipal road allowance.

Opposition to Bipole III dates back almost a decade to when Manitoba Hydro proposed building the transmission line on the west side of Lake Manitoba, cutting through valuable farmland en route to a converter station on the southeast side of Winnipeg (see a map here).

While some property owners have signed easement agreements, others have been frustrated with the compensation offered by the Crown corporation and by Hydro’s refusal to negotiate with landowners collectively. Kohler estimates there are still between 60 and 80 landowners holding out on signing easement agreements.

“We’re still hopeful there’s an opportunity to negotiate. It’s a much better outcome to have negotiations lead to an agreement than to just expropriate and plow your way through,” he says. “Even one expropriation is too much.”

According to PC agriculture critic Blaine Pedersen, who joined the demonstrators on the weekend, 140 farms received expropriation notices last March. Pedersen introduced a motion for an emergency debate on the situation in the provincial legislature on Monday afternoon, but it was defeated.