Over the past few years, we’ve been inundated with media updates surrounding H5N1, Ebola, and now, Zika virus. But something we often overlook in all the coverage, is that many diseases — and in fact, all three of the aforementioned — are zoonotic. In other words, they can be passed between humans and animals. That draws together a unique collaboration of international agencies, one of which is the World Organization for Animal Health, or the OIE.

“Top of mind for OIE right now is how do we prepare industries — how do we prepare countries — to deal with the global reality of what we’ve seen over the past several years,” Brian Evans, deputy directory general (animal health, veterinary public health, international standards) for the OIE, told us at the Alberta Beef Industry Conference in Red Deer last week.

But preparing countries for the unknown can be tricky, especially when it comes to zoonotic diseases, which offer their own unique set of challenges.

Zika virus was first
identified in rhesus
monkeys in Uganda
in 1947.

“Our challenge at OIE is how do we ensure that when we’re dealing with zoonotic diseases, that there is a coming together of animal health and public health in a way that’s responsible, that supports the economic interests of the sector, but also protects public health, food security and food safety.”

In order to address the continual intersection of public and animal health, the OIE works closely with the World Health Organization and the Food and Agriculture Organization, both of which fall under the “United Nations family.” Together, the three organizations encompass what is known as the “Tripartite Alliance,” and endorse the “One Health” approach to human, animal and ecosystem health threats. 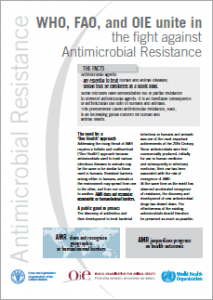 Not a day goes by that Evans isn’t in contact with someone from one of the other two organizations, he told us. Discussions today often involve Zika virus in the Americas and Ebola in Africa. And it doesn’t look like their collaboration will subside anytime soon. Evans predicts that we will see five new diseases per year going forward, with at least three being zoonotic.

Related: Genetic Engineering Keeps Pest Populations in Check — For Human and Crop Health
Why We Can’t Afford to Walk Away from BSE Testing

Now, combine those ever-changing factors with the fact that we’re rather fussy about how we handle threats.

“[Zika] was well-contained for many decades in Africa and Asia, but when society stood up and said, ‘we don’t like this idea of mass fogging…’ it has other consequences,” said Evans. “As we start to think about that, we have to have alternate strategies. So we need to come back to society and say, ‘we understand the issue around the chemicals and insecticides, so we need to have a smarter strategy.'”

Part 1 of our interview with Brian Evans, deputy director general, OIE. It was recorded moments after his presentation at the Alberta Beef Industry Conference. In Part 2 (coming soon), we discuss the OIE’s PVS Tool as a resource for Canadian beef producers.

For Canadian beef producers, the threats of disease mean a few things, says Evans. The industry has shown its very capable and responsive, but it’s time to work on being proactive, and communicating positively to the public, and to trading partners. There’s also a need to invest in research he said, and better biosecurity, not just at home but nation- and world-wide.

“I am a big, big believer that Canada will feed the world in the future, but we need to take stock of what to do at the private sector level and take some ownership of those issues, and make sure we have the strategies in place that are socially acceptable, that consumers are very much a part of, and that consumers are equally proud of the industry, as they are of the food that they eat.”

Wheat School: The Benefits of Starter Fertilizer in Ontario

Seeking knowledge on the journey to soil health

Many continuing to get familiar with the term IoT, which stands for Internet of Things. Any device that connects to the cloud — whether it be smartwatches, smart TVs, smart thermostats, etc. — falls under the IoT category. Examples of IoT already exist in the agriculture industry, says Daniel Portela, director of product and services…