A lot of focus in the market last week was on the wheat market as warm weather from Kiev to Kansas is pushing fall-seeded crops out of dormancy much earlier than usual. After last week’s best weekly gain for wheat since October, investors’ focus will now turn to weather forecasts and the stocks and acreage report in 2.5 weeks time. With the trade generally sideway over the course of this week, the attention starts to focus more on South American harvest and export activity, the March 31st US stocks and planting intentions report, and between all of this, weather conditions (namely the switch from El Nino to La Nina and when it could happen!).

The rains and hail that hit India over the weekend are still being measured in terms of their damage, but the greatest effect will likely be on chickpea, wheat, and rapeseed crops, which support continued elevated levels of pulses and veggie oils. While the damaged is assessed, we have started to see some new crop lentil and peas bids in Western Canada improve, but the Canadian Loonie rising above 77 cents is capping any significant strength in those climbing cash grain bids.

Why is the Canadian Loonie higher? Oil prices are starting to improve with a clearer demand-supply picture emerging, with most countries freezing their production. That being said, Iran is increasing its production to about 3.1 million barrels per day, up from less than 1 million in January! Further, O.P.E.C. says that demand will taper off in 2016 and so, the ultimately bull-run killer comes back to the supply factor more than anything (see any correlation to grains here?).

Recent winter wheat crop conditions released by the USDA show 56% of the crop is in good-to-excellent (G/E) shape in Kansas (the top wheat-growing state) and is jointing earlier than usual, with 6% of the crop in that phase, versus the 5-year average of 2%. Texas wheat conditions gained 4 points on the week, now sitting at 46% G/E. The Texan improvement was a surprise as the moisture remains a concern there and with the early move out of dormancy, farmers and traders are closely watching temperature levels for the next 2 weeks or so in the Southern Plains (is it officially spring?!?!).

Let’s not jump to a bullish stance just yet though. Thanks to 3 consecutive bumper wheat crops (technically this includes this year’s forecasted crop), the European Commission says that EU wheat inventories to end 2016/17 will stand at an 8-year high. Other than bigger production, the reason for this hike is the tough competition in the export market (currency and cheap freight at play here) as EU soft wheat exports are expected to fall to 27 million tonnes, a 7.25% decline from this year’s projected 29.11 million tonnes and a 19% decline from 33.34 million tonnes in 2014/15.

With a smaller EU corn harvest last year though, feed wheat is in demand but there’s a lot of it, hence why London wheat futures dropped below £100/tonne recently for the first time since 2010 (equivalent to $3.84 per bushel in USD or $5.18 CAD at today’s exchange rates). Across the English Channel and then some, German farm co-ops are saying that fall-seeded crops have weathered the winter well, with no significant damage. Expectations from the German co-op DRV are for the rapeseed crop to be 0.7% bigger year-over-year to 5.04 million tonnes (EU Commission estimate is at 4.98 million, Coceral at 5.18 million, IGC at 5 million) and the wheat crop to be 1.7% smaller than 2015/16 at 26.1 million tonnes (EU Commission at 26.2, Coceral at 26.15, IGC at 26.5).

While we’ve been suggesting some bargain shopping was going on in the canola market with futures off their lows, the U.S.D.A. recently estimated Canadian canola crush at 8.1 million tonnes, up 560,000 from 2014/15 or +7.4%. While crush is currently running about 12% ahead of last year’s pace, according to the AAFC (who thinks the yearly total for Canadian canola crush will come in at 8.2 million tonnes), the lower Canadian Loonie is helping canola meal exports into the US fly past the record levels set in 2014/15, with the pace about 13% ahead of last year. 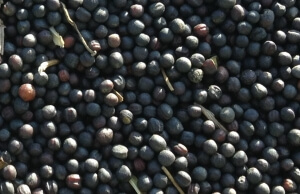 This, combined with lower soybean prices, domestic U.S. soymeal prices were sitting at their lowest in 8 years in February. Alas, the market was able to break back above that $475/tonne value on the Winnipeg ICE futures board for new crop. Despite canola meal exports booming, the market got a surprise when February American soybean crush numbers came in well-above expectations with 146.2 million bushels crushed, the 3rd-largest figure ever for the 2nd month of the year. The flipside of this is that US soyoil stocks also rose which kept in bulls in line.

With the early spring weather though, we’re clearly getting the itch to scratch some dirt. One should be pretty close to knowing their final intentions, with some swing acres here and there obviously possible. With El Nino conditions deteriorating rather quickly, it suggests decent seeding conditions but obvious concerns are if La Nina shows up in the early summer. As such, I’m calling it: the 2016 growing season will become known as The Year of the Switch.

Two products added to Keep it Clean advisory list for 2022

China lifts embargo on canola from Richardson and Viterra