Andrew Campbell, a dairy farmer from Strathroy, Ontario and a frequent contributor here on Real Agriculture, has been recognized for his work raising awareness about farming.

While he’s frequently interviewed by non-ag media and writes regular columns, the #farm365 initiative in 2015 was cited as his “crowning achievement,” as Campbell posted a photo on social media for 365 consecutive days. 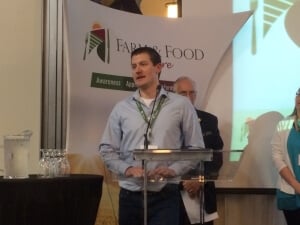 He was nominated for the award by the Middlesex Federation of Agriculture, with letters of support provided by Dairy Farmers of Ontario and writers from www.DinnerStartsHere.ca – the blog site run by young Ontario farmers.

“Andrew is a true leader and an excellent representative for the next generation of farmers,” noted Ralph Dietrich, chair of Dairy Farmers of Ontario.

The Champion Award has been presented annually, since 1999, to worthy agricultural advocates.

China lifts embargo on canola from Richardson and Viterra