The average value of farmland in Canada continued to rise at a double-digit rate in 2015, according to Farm Credit Canada’s annual farmland values report published on Monday.

FCC says “this year in particular, the differences between regions within each province varied a lot,” but the average value of farmland across the country rose by 10.1%.

“We’re now seeing lower commodity prices offset by low interest rates and a weak dollar. The weak loonie not only makes our exports more competitive, but helps producers receive a better price for their commodities that are mainly priced in U.S. dollars,” he said. “It becomes a real tug-of-war between competing factors that influence farmland values.” 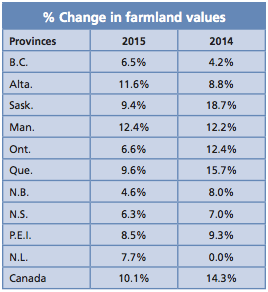 You Said It: Summary of Comments on Proposed Changes to CGC