To some growers, it’s an old idea; to others, it’s completely new. The concept of peola — intercropping peas and canola  — has been around in Western Canada for decades, but with new varieties and weed control options, the practice seems to be gaining momentum again.

In 2009, the Westman Agricultural Diversification Organization found an attention-grabbing yield benefit to growing the two crops together and WADO has since explored different agronomic factors and practices for the combination at its farm near Melita, Manitoba.

“We’ve seen quite a few acres go (to pea-canola intercropping) in Manitoba,” notes WADO’s Scott Chalmers in this Canola School episode. Most of those acres are in the southwest part of the province.

The increased total yield is what’s driving the interest. As Chalmers explains, they’ve seen yield benefits of “anywhere from 10 percent up to 60 percent” when converted into what’s called a land equivalent ratio — the amount of land needed to grow both crops if they were grown separately.

Over the years, WADO has looked at moisture use, nitrogen rates, where to place the seed for each crop and other agronomic considerations.

“When the plants are growing on top of each other in the same row, that’s when we get the greatest benefit in over-yielding,” he says.

Some of the nitrogen fixed by the peas is likely shared with the canola, as Chalmers says they’ve found a lower soil nitrogen credit when peas are intercropped with canola.

“We also suspect we’re using more phosphorus, maybe potash too. If we’re overyielding, we’re obviously using more nutrients from the soil, so our future work that we want to do is to look at phosphorus and see if we can get a response with higher phosphorus rates,” he explains.

Chalmers is also urging growers to consider adding alfalfa or clover to the mix to maintain N-fixation and to maintain plant growth and organic matter.

Chalmers discussed the lessons WADO has learned about pea-canola intercropping at CanoLab ’16 in Brandon. 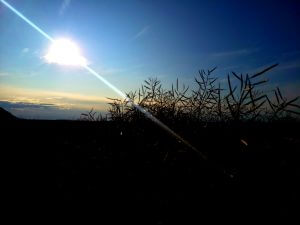 Get Past High Protein — Why Smaller Classes of Wheat Deserve Attention