Ever wonder where Canadian canola ends up?

90 percent of the canola grown in Canada leaves the country to be processed and/or consumed in almost 50 countries around the world, explains Bruce Jowett, vice-president of market development with the Canola Council of Canada, sharing a rundown of export markets in this Canola School episode.

The United States, China, Japan and Mexico are the four largest customers.

“Our greatest market, at about 37 percent is the United States. They take primarily oil, as well as the majority of the meal we produce — somewhere around 96 percent of meal production,” he notes. 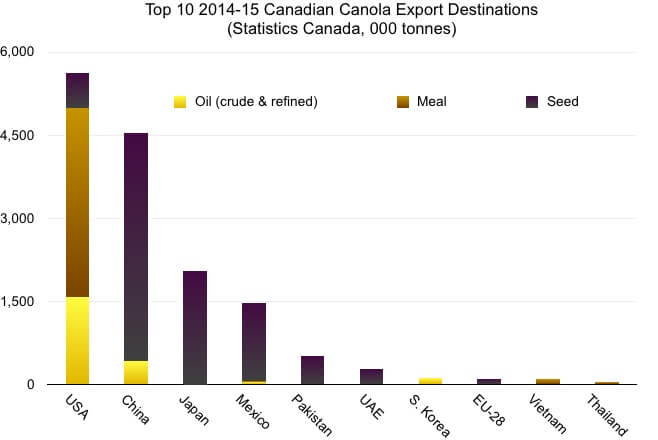 Maintaining these export markets is critical for supporting the value of canola, he notes.

“What we’re seeing we have an opportunity to do a better job educating growers on what they can do on their farm as it relates to growing, making decisions and storing their canola — the understanding that what they do on their farm really does have an impact on our ability to have these markets available to us.”

Jowett offers an overview of where Canadian canola is headed, and steps farmers can take to ensure these markets stay open: