While hog operations across the U.S. and Eastern Canada have been devastated by PEDv over the last few years, Western Canadian hog farms have managed to stay mostly disease-free despite constant truck traffic across the border. The pig industry on the prairies has been held up as an example of how to manage against virulent diseases like PED, which has killed between 8 and 10 million baby pigs in the U.S. since 2013.

And now the federal government has taken away one of the main biosecurity tools the industry had for keeping the disease out.

Since February 2014, the Canadian Food Inspection Agency allowed trucks to return to Canada without being washed at American facilities. You might be thinking, “wait a second, don’t we want the trucks to be cleaned before coming back to Canada?” 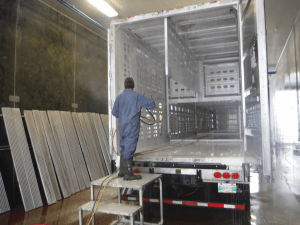 Well, the problem is American livestock truck washes are visited by trucks known to be carrying PEDv. Some of these facilities use recycled water and there’s no certification process ensuring trucks are washed to a minimum standard, so the trucks bringing Canadian pigs south would come straight back to Canada to reduce the risk of becoming contaminated. After being sealed at the border, they would head directly to a certified wash facility in Western Canada to be disinfected according to standards set by the Canadian Swine Health Board.

“The theory and principle behind this is the trailers leaving Manitoba, going into the United States don’t have the disease on board. If they’re very careful at the farms in the U.S., there’s no chance of the disease getting inside the trailer,” explains Andrew Dickson, general manager of the Manitoba Pork Council in our conversation below. “The trick is to try to preserve the interior of the trailer disease-free, have it come back to the border, seal it, wash it and disinfect it in Manitoba.”

However, as of May 2, the CFIA has reverted back to manure regulations established in the 1990s that say trucks must be washed in the U.S. to be allowed entry back into Canada.

The provincial pork producer groups, the chief veterinarians for Manitoba, Saskatchewan and Alberta, swine health researchers and practicing vets are virtually unanimous in demanding the federal government continue allowing trucks to come back to Canada without visiting U.S. truck washes. They’ve been asking the CFIA and federal ag minister to change, or at least delay, the regulations, but to no avail.

“We’ve got a wash procedure audit, wash procedure protocol for western Canadian truck washes and so that gives a level of security that most regions don’t enjoy and certainly something we want to continue to promote and work with. The programs that we’ve had in place have been very effective,” Dr. Egan Brockhoff of Red Deer-based Prairie Swine Health Services told Farmscape last week.

Manitoba is a major exporter of weanlings — between 65 and 70 thousand baby pigs head south each week, according to Dickson. Using conservative math, that’s 35 to 40 trailers every seven days that now have to visit U.S. wash facilities that could be contaminated with PED. And that’s not counting trucks hauling breeding stock south or large animals headed straight to U.S. packing plants (trucks visiting USDA-inspected abattoirs are only required to be scraped, not washed, to re-enter Canada).

So why is the CFIA ignoring the hog industry and letting old regulations put Canadian pigs at risk?

“I gather their lawyers have been talking to them, saying ‘the law is the law and you have to enforce the regulation,'” he says.

In a notice to livestock truckers, the CFIA says it “reviewed the situation and has concluded that the outbreak of PED in Canada no longer merits an emergency response.”

Agriculture Minister Lawrence MacAulay is aware of the situation, but has yet to follow through on a promise to meet with Manitoba Pork. Producer groups are calling on the minister to help resolve the issue.

“We’re asking the federal minister to get directly involved, to use his authority and the capacity in his office to try to bring this matter to a resolution that protects the hog industry in Western Canada,” says Dickson.

Meanwhile, producers are urged to assume that trailers washed only at U.S. facilities are contaminated with PEDv. Dickson notes all the companies he has talked to say they will continue washing at Canadian facilities, even though there will be a significant cost and downtime with washing trucks on both sides of the border.

The decision to go back to the old rules doesn’t make sense. It’s increasing both the cost of maintaining biosecurity and the risk of spreading PEDv.

It’s time Minister MacAulay and senior CFIA officials figure out how they can help, instead of hurt, the industry’s effort to keep PEDv out of prairie hog barns.

Who makes the call to close a processing plant?

Pulse Canada to Receive over $3.3M to Address Sustainability, Trade and Marketing