Grains through the middle of May saw fund buying continue to try keep the elevated prices where they’re at after some bearish weather and crop progress reports. Some warmer temperatures in the forecast for June across many parts of North America’s major growing regions have been offset by some timely rains in many locations. More simply, the week started out with Armageddon-like concerns over what hot temperatures would do to crops across North America, but rains have literally been exhausting those flames being fanned by the bulls.

Corn was able to end the week up almost 3.5% at nearly $4.40 a bushel in Chicago, as the buzz builds around how many acres from the U.S.D.A.’s 93.6 million they called back in March will be lost. Given portion of the crop rated good-to-excellent at 75%, and some decent rains falling, there’s a diverging theme amongst traders as to whether we go back below $4 or up to $5.

One of the main arguments for the latter is the continued calls for a devastating La Nina drought this summer. One of the best in the weather game (in our opinion), Drew Lerner from World Weather Inc. says that commercial forecasters are beating the “drought drum” too loudly and this talk is overblown. Yes, the N.O.A.A.’s extended forecast continues to show some warmer-than-average temperatures, but they’re also calling for average precipitation across the U.S.

On June 30th, we’ll the U.S.D.A.’s update for what they think actually went into the ground this year (compared to their March 31st estimates) and too much rain in the U.S. Southeast is likely one of the reasons we’ll see a smaller corn number. It’s been suggested that up to 2 million acres could be dropped from the forecasted corn acres but this still means more than 90 million acres got planted, and likely a 14 billion bushel crop.

For soybeans, down 1.6% for the week, the U.S.D.A. forecasted 82.2 million acres back on March 31st, but Joe Vaclavik from Standard Grain says that this number could jump to 85 million acres given the $3/bushel gained in the last 10 weeks (or +28% so far since the beginning of April and +32% since the beginning of 2016). With those extra soybeans coming off, this could pump the 2016/17 carryout back above the 300 million bushels that the U.S.D.A. was forecasting last month (they were at 260 million in last Friday’s June W.A.S.D.E. report).

Keeping that additional soybean production in mind, the N.O.P.A. crush report for May came in at 152.8 million bushels, more than 3 million bushels than the trade was expecting, and a new a new record for the month! Ethanol production also doesn’t seem to be slowing down either as a new record of 1.013 million barrels were produced per day last week in the U.S. Simply put, both these processor numbers continue to support the demand factor of the 3 reasons for this spring rally (fund buying and the weather premium being the other two).

Staying in soybeans demand, the U.S.D.A. is estimating Chinese soybean imports in 2016/17 at 87 million tonnes, up 5% from this current marketing year and another record (anyone surprised?). Their attaché though in Beijing thinks that the actual number could come in closer to 85 million tonnes thanks to the release of reserves by the Chinese government limiting the need for those additional 2 million tonnes.

What’s for certain is that protein demand continues to rise in China, where they have bragging rights for 60% of the world’s pig population and 14% of the world’s chickens! Further, China recently topped Japan as the largest importer of US pork, a clear signal that the demand for meat amongst the growing Chinese middle class isn’t slowing down. This is a consistent theme in many other southeast Asian countries, but with less corn coming out of South American many feed buyers are switching wheat into livestock diets instead.

This is welcomed by many countries around the world as supplies continue to be large globally. Continued rains in Australia is supporting A.B.A.R.E.S.’ decision to raise their estimate of the Aussie wheat crop to 25.4 million tonnes, the largest in 4 years, despite its area dropping slightly year-over-year to 31.4 million acres. For barley, the Aussie version of the U.S.D.A. is forecasting 10 million acres getting planted to produce a 9 million-tonne crop (a 3-year high), while canola production in the Land Down Undaa is projected to come in at 3.24 million tonnes (+10% year-over-year) off of 6.3 million acres.

The Asian feed wheat demand is also welcomed by France, where their largest grain co-op says the hurried pace of exports out of France will continue into 2016/17, especially if ocean freight rates stay cheap. Where that French wheat may not be going is Egypt is the country continues to be tough on ergot levels in imported cargoes of wheat, as their 0.05% maximum tolerance is turning away multiple traders, especially in Europe where recent rains are increasing the risk of disease.

Thanks to those rains in Germany and France, Strategie Grains dropped production estimates for the the 2 countries by a combined 1.3 million tonnes, but the decline was offset by an increase of 1.3 million tonnes in Eastern and Southern European regions, including Romania & Spain. Obviously the drop in France and Germany though coincides with a likely decline in quality, which could limit exports (i.e. spring wheat or durum into North African states, opening the door for North American business). However, Canada’s wheat exports have been slowing and, at this point in the marketing season, are unlikely to hit trade estimates, meaning a carryout above the dreaded 4 million tonnes everyone has been talking about.

Peas demand is expected to remain strong through early 2017 albeit we’re very cognizant of the good start to this year’s growing season in Canada, better rains in Australia, and the large increase in acres in Europe, Russia, and the U.S. Analysts covering the peas markets are a little mixed as to where prices are going as differences on acres planted and average yields around the world are clearly separating the bears from the bulls. However, we believe that there’s a higher chance of upside to downside at this point, and a strong export program immediately at harvest time.

These fundamentals in mind, especially regarding how the crops are looking today, we believe it’s important to be proactive in terms of potentially pricing out remaining crop that’s in the bin. Putting something on the books to move so you have both bin space and cash available ahead of harvest is a smart move (unless you’re in a position that you don’t need to, of course!). It’s worthwhile to recall years past or even this past spring, where you rushed to move product at the last minute, and likely settling for a less-than-optimal price versus a weeks or months earlier. Simply put, manage price risk accordingly, making sales in blocks of 10-20% (of what’s in the bins or of potential production) in a disciplined manner (not on emotion), and make sales when you can, not when you have to.

Overall, weather premiums seem to be losing some of their lustre, but demand fundamentals are keeping the funds happy. However, there are definitely still many unknowns at this point in the growing season, but, given the good start to the crop, and if conditions were to remain average (which is basically in the forecast as of this second), the hot fire that’s been lit under the grains rally these past 2.5 months will start to get put out. 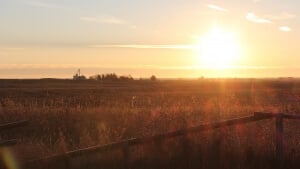 Pulse School: Tuning in to the fall market

Harvest price pressures starting or ending? — This week in the grain markets