Update, February 9, 2017: Since this article and podcast were published last June, the number of asylum-seekers crossing the border near Emerson has continued to climb. Dozens continue cross each month, despite freezing cold conditions. Since April 1, the start of its current fiscal year, the Canadian Border Services Agency, says it has recorded 403 cases. The situation has also gained international media attention, coinciding with U.S. president Donald Trump’s recent executive orders on immigration and refugees.

A farm near Halbstadt, Manitoba and the country of Somalia — could there be a greater contrast in places on this planet?

One, a quiet, rural landscape, as flat as the ground can get, a big sky overhead, and a scattering of large country yards — a typical northern prairie setting. The other, a nation on the other side of the world — a beautiful landscape, devastated by corruption, terrorism and civil war, and without a stable government in 25 years.

The situation in Somalia seems a world away for most Canadians, but some farmers and landowners in the Halbstadt area, near the Canada-United States border crossing at Emerson, are coming face-to-face with the human reality resulting from the desperate circumstances in the Horn of Africa.

People who have fled Somalia are increasingly being found in farmers’ fields, rural yards and along roads in the local Emerson/Halbstadt area. It’s been happening for years, but has escalated rapidly in the last two years.

According to the Canadian Border Services Agency (CBSA), a whopping 294 Somali asylum-seekers were intercepted on Canadian soil and brought to the Emerson border crossing in the 12 month period that ended March 31, 2016. In 2014-15, 122 people from Somalia were found in the local area seeking refugee status. In 2013-14, CBSA booked 61 Somali refugee claimants in Emerson.

“It’s part of life in this community,” explains Howard Friesen, who farms in the Halbstadt area.

How are people fleeing conflict in Somalia ending up in rural southern Manitoba?

“We know, and so does CBSA, that there is a pretty well-established underground railway, like there was for black slaves two, three hundred years ago, from the United States into Canada, to get them to safety,” says Karin Gordon, who works with Hospitality House Refugee Ministry in Winnipeg. She’s made the hour-long drive south down Highway 75 to Emerson several times to pick up Somali refugee claimants.

Hear from Howard Friesen, Yahya Samatar, and Karin Gordon in this feature podcast:

Most of the people found in the Emerson/Halbstadt area have been denied asylum in the U.S., and told to get lost or they’ll be deported. Rather than risk being sent back to Somalia, they choose to walk across the border. If found on Canadian soil, and if CBSA decides there are no admissibility concerns, they can apply to become government-sponsored refugees in Canada.

One of those people, Yahya Samatar, was a humanitarian aid worker and human rights activist in Somalia. In his early 30s now, he was captured and tortured by Al Shaabab, the Al Qaeda-associated militant group that controls part of Somalia. His brother was murdered, with the terrorists mistakenly thinking he was Yahya.

“I was arrested and threatened badly several times by the Al Qaeda-related group, the local government and local administration as well, for the work I’d been doing and I was forced to leave the country within 15 days,” he explains. In August of 2014 he fled to Ethiopia. Still in danger, he flew to Brazil. Along the way, he connected with a human smuggling network and paid $12,000 to be taken to the United States.

In November 2014, after an eventful trek from Brazil through Central America, Samatar turned himself in at the Mexico-U.S. border and was subsequently sent to jail, spending seven months and 10 days in Texas and Louisiana. Upon release, he applied for asylum, but was rejected. He then made his way to Minneapolis, Minnesota. According to Samatar, Minneapolis not only has the highest Somali population in North America, but the largest Somali community in the world outside of Somalia and neighbouring Kenya, where there are many Somali refugees.

From Minneapolis, Samatar and other Somali asylum-seekers find friends to drive them 390 miles northwest, ending up on the I-29 interstate near the Pembina/Emerson border crossing. Yahya’s friend dropped him off a kilometre from the Emerson Port of Entry in the middle of the night in late August 2015.

“I walked through a farm field and went deep into the forest where I finally came to the Red River,” he says. Not knowing the Red River flows north, Samatar ditched his clothes and papers and jumped in the river in the early morning, thinking he needed to swim across to reach Canada. Based on what he knew about rivers back home, he says he was also concerned about the risk of crocodiles in the river. He was eventually found walking along a road in his underwear, and taken to the Emerson border crossing, where Karin Gordon picked him up. 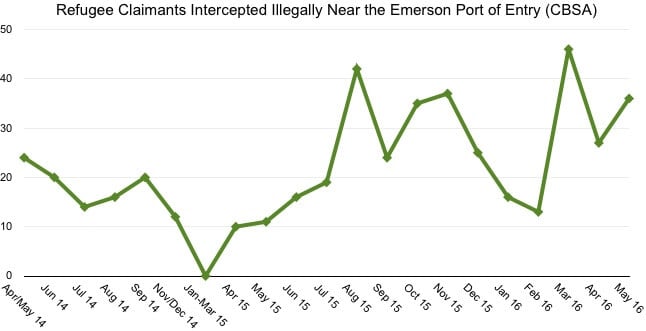 While Samatar’s story is unique, most of the Somali people being found in the Emerson/Halbstadt area have followed a similar route from Minneapolis.

Some are found dehydrated after getting lost and walking miles unnecessarily. There’s a story of one farm worker seeing several Somalis in his combine lights while harvesting.

Some of them end up several miles west of Emerson, near an old TV tower with bright blinking lights that are visible for many miles at night. The KNRR tower, originally built to reach Winnipeg and southern Manitoba without having to follow Canadian broadcast regulations, is located half a mile south of the international border, west of Pembina, North Dakota. Samatar says he isn’t familiar with the landmark, but local farmers and landowners believe the Somalis are told to walk toward and past this landmark to avoid border officials and gain entry into Canada.

“I think that’s why we’re getting them. It’s pretty big and visible in the dark,” notes Friesen.

It’s a surreal situation, as some people living in the area near the border at Emerson and Halbstadt have become accustomed to finding people who have fled Somalia. Some fear going outside at night.

“While the majority of asylum seekers are usually not a threat to public safety, we do not recommend engaging with individuals illegally crossing into Canada,” says Sgt. Bert Paquet of the Manitoba RCMP, noting area residents who encounter suspicious people should immediately call the police.

The RCMP, which has jurisdiction between ports of entry, brings asylum-seekers who are found in the area to the Emerson border crossing for screening, which includes fingerprinting, background checks and photographing the person. If no red flags arise, the claimant is asked to report to a CBSA office the following day to begin the process of applying for refugee status. Some of the people walking across near Emerson are believed to make it to Winnipeg, or even Toronto or Calgary, before contacting CBSA or immigration officials.

This spring, 73 Somali people were found near Emerson in April and May. Samatar says he expects more are on their way to Manitoba.

As for his case, an adjudicator has approved Samatar’s bid to stay in Canada while he seeks his permanent residency status. He’s working full-time while taking classes to complete his grade 12 equivalency, as his post-secondary education in Somalia hasn’t been recognized in Canada. His wife and four children — one of whom was born while he was in jail in the U.S. — are living in Kenya. He hopes to gain his Canadian citizenship and then sponsor his family’s immigration to Canada, a process which could take many years.

“Whenever I share my story, I just want to let (people) know that there are difficult circumstances that people with different backgrounds in different countries live with,” he says.

And those difficult circumstances are what’s leading hundreds of Somali people to rural farmyards and roads near Emerson.

“They’re being murdered. They’re being raped. They’re being taken into slavery. Canadians just have absolutely no idea of how bad situations are for these refugees,” says Gordon. “All of those people that you meet, the stories that they have are just incredible.”