With above average yields anticipated in Western Canada and the northern U.S., there will probably be some grain going into what we might call nontraditional or alternative storage facilities.

“Grain must be dry and cool (near the average outdoor temperature) when placed in alternative storage facilities because providing adequate, uniform airflow to dry grain or cool grain coming from a dryer is not feasible in these facilities,” he says.

Hellevang and NDSU shared the following information this week, saying producers should consider these points when storing grain in these alternative methods: 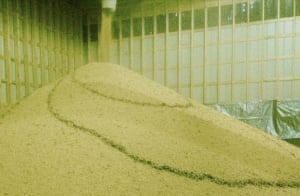 Grain pushing against the walls can damage buildings not built for grain storage. The walls must be anchored securely, and their structural members must be strong enough to transfer the force to the building poles or support structure without breaking or bending excessively.

Typically, you will need additional poles and a grain wall to support the grain force in a pole building. Hellevang advises hiring an engineer to complete a structural design or analysis, or contacting the building company for guidance to prevent a structural failure.

Before placing grain in a building previously used for grain storage:

Storing grain in poly bags is a good option, but it does not prevent insect infestations or mold growth in damp grain. Hellevang recommends:

Never enter a grain bag because it is a suffocation hazard. If unloading the bag with a pneumatic grain conveyor, the suction can “shrink wrap” a person so he or she cannot move and will limit space for breathing.

Precipitation is a severe problem in uncovered grain. A 1-inch rain will increase the moisture content of a 1-foot layer of corn by 9 percentage points. This typically leads to the loss of at least 2 feet of grain on the pile surface.

Soybean School: When a Soybean Is No Longer Just a Soybean

Wheat School: New Wheat Classes in Session as of August 1