The latest generation of New Holland’s flagship BigBaler promises to raise the bar for big square density and uniformity.

New Holland unveiled the BigBaler 340 Plus last month at the Farm Progress Show in Boone, Iowa. In this video, New Holland hay and forage marketing manager Seth Doman explains that the key feature making this a ‘plus model’ is its ability to increase bale density by up to 10%.

New Holland pumped up the density by extending the bale case 31.5 inches, which allows the baler to put more weight in every bale. Doman says that means less bales in the field, decreased transportation time whether farmers are picking up bales in the field or using a self-propelled bale wagon, as well as reduced storage cost. The extended bale case also delivers uniform bale size, making it easier to stack bales on trucks and strap them down.

New features also include IntelliCruise, which allows the baler to control tractor speed. “If the baler is asking for more hay, it’s going to speed up the tractor,” explains Doman. “If it has enough hay and it’s a nice windrow, it will slow down and make the baler make a nice uniform bale size.”

There’s also improvements in the twine box where room for two additional twine bales has been added. New LED lighting will illuminate the twine box to make adjustments during nighttime baling easier. Up top, the baler features a wider platform, providing improved visibility and serviceability for operators. 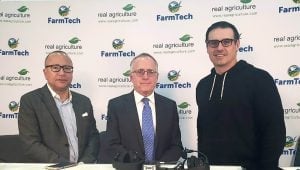 What will it take to thaw Canada’s cold relationship with China?

Canada's relationship with China could get worse before it gets better, depending on the outcome of the U.S. extradition request for Chinese telecommunications executive Meng Wanzhou, according to an expert on Chinese affairs at the University of Alberta. Farmers in both Canada and the U.S. have been paying close attention to their respective country's relationship…Read more »